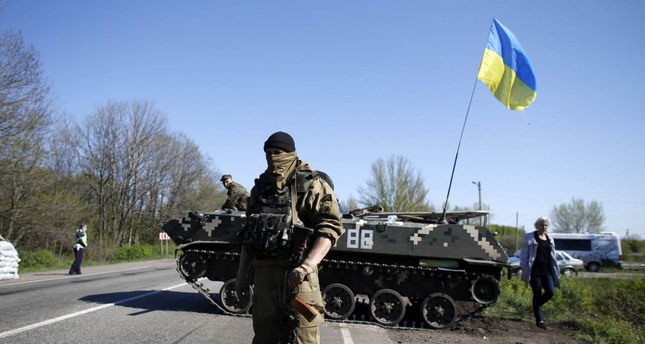 by daily sabah
Nov 13, 2014 12:00 am
Ukraine has accused Organization for Security and Cooperation (OSCE) observers of disclosing information about Ukrainian military locations to Russia. Observers of the Special Monitoring Mission (SMM) of the OSCE allegedly gave details of the locations of heavy artillery and tanks of Ukrainian armed forces in Donetsk oblast to Russia.

Regarding the escalating violence in the rebel-held areas after the arrival of columns of Russian military reinforcements in the east of the country, President Petro Poroshenko of Ukraine accused Russia and the Moscow-backed separatists of violating the protocol agreed to at peace talks on Sept. 5 in Minsk, Belarus, under which a ceasefire went into effect in eastern Ukraine. "The representatives of the self-declared Luhansk and Donetsk People's Republics have practically rejected implementing the Minsk agreements, while there is no progress in Russia's implementation," Poroshenko told Chancellor Angela Merkel of Germany in a phone conversation on Tuesday, reported DPA.

Russia is known to provide financial support to the rebel groups, but it has continued to deny the presence of its troops in Ukraine since the start of the months-long crisis despite volumes of hard evidence. Regarding Russia's increased militarization of the rebel-held areas in the Donbass region, the U.S. called on Russia to halt "continuous blatant violations of the Minsk protocol by Russia and its proxies."

"If Russia is truly committed to Minsk and peace in Ukraine, it will stop fueling the fire with new weapons and support for separatists and withdraw all Russian military personnel and equipment from Ukraine, and it will call on its proxies to stop ceasefire violations, release hostages and close the international border," U.S. State Department spokeswoman Jen Psaki said in a press briefing on Nov. 10.

Intensified shelling around Donetsk, where separatists have made territorial gains, was reported on Wednesday. Despite the ceasefire agreement, heavy fighting has continued in the embattled east following the pro-separatist referendum for self-rule held on Nov. 2. The ongoing clashes have turned the city of Donetsk into a combat zone, as rebel groups continue to attack Donetsk airport.

The crisis in Ukraine has strained relations between Russia and the West and is not helped by the multiple violations of the ceasefire. Due to Russia's backing of rebels with arms and fighters in eastern Ukraine, the EU and U.S. have imposed economic sanctions on Russia. However, Chancellor Merkel on Tuesday rejected imposing tightened sanctions on Russia, saying that the main goal of the EU bloc "should be to implement the ceasefire in eastern Ukraine" before the devastating effects of winter start to affect internally displaced Ukrainians who are living in miserable conditions. Merkel's statement came before the EU bloc's foreign ministers meet to discuss the issue next Monday.

Meanwhile, the U.N. Security Council held an emergency session on Wednesday to discuss the worsening relationship between the West and Russia over the crisis in eastern Ukraine and the worsening humanitarian situation in rebel-held areas. Since the fighting erupted in the east of the country, at least 3,660 people have been killed and 8,756 wounded, according to U.N. reports on Ukraine.