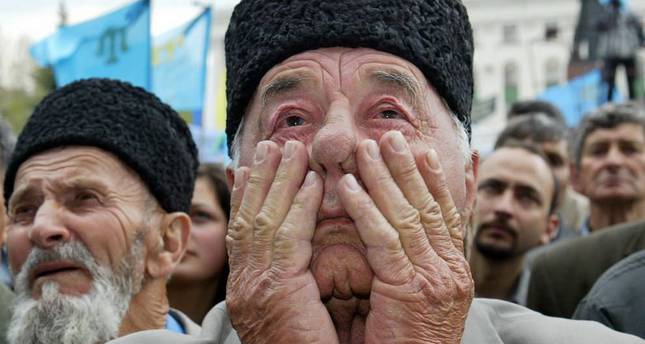 by daily sabah
Nov 17, 2014 12:00 am
Crimean Tatars, who are now effectively living in Russia since the Russian occupation of the Crimean Peninsula, have been facing severe abuses of human rights, Human Rights Watch (HRW) has reported. Based on 42 interviews with members of the Crimean Tatar community, the report "Rights in Retreat: Abuses in Crimea" revealed "intimidation and harassment of Crimea residents who oppose Russia's actions in Crimea, in particular Crimean Tatars, as well as activists and journalists."

"As the world's attention has been on the hostilities in eastern Ukraine, rights abuses in Crimea have surged," said Yulia Gorbunova, a Europe and Central Asia researcher at HRW. "Under various pretexts, such as combating extremism, the authorities have been persecuting people who dared to openly voice criticism of Russia's actions on the peninsula," she added.

Regarding the grave violations of human rights in Crimea, HRW called on the U.N. Security Council to adopt a resolution on the basis of recommendations regarding the situation in Crimea as indicated in the report. The human rights agency also urged Russia to allow human rights monitors free access.

The report put emphasis on Russian security forces' aggression in its raid on the Tatar self-governing body the Mejlis of the Crimean Tatar People in Crimea's capital city of Simferopol and their charitable organization in September. The report stated that Crimean Tatars have become victims of political repression and humiliation.

HRW indicated that Crimean residents are deprived of holding Ukrainian citizenship. If they deny holding Russian citizenship, then serious sanctions are applied to them as they are treated as foreigners in their own territory. Russia's mistreatment of the ethnic minority has been reported citing Crimean Tatar mosques and national schools that were searched by the Russian Federal Security Service. Many Crimean Tatars have been interrogated and detained on suspicion of extremism.

"Russia is not really offering people a choice of citizenship but forcing civilians under its control to choose between taking Russian citizenship or facing discrimination and worse," Gorbunova said. "This is a serious violation of international law and is in reality no choice at all."

Remaining neutral on the Russian occupation of Crimea, HRW seeks to ensure that international laws governing the conduct of war and occupation are respected. It also urged all parties to stop grave human rights abuses in Crimea and the increasing deprivation of human rights of Crimean Tatars living under Russian rule.

Regarding the annexation of Crimean peninsula, Russian President Vladimir Putin said Russia did not violate international law stating that both the regional parliament and the people voted for it in a referendum. Comparing Crimea with Kosovo independence, he stated that Crimeans decided to join Russia through holding a referendum while condemning the Western countries' overreaction.

"We consider the reaction to be completely inappropriate to what happened," said Russian President in a German television interview on Sunday. "I am firmly convinced Russia did not violate international law in any way," he added.

Following the annexation of Crimea by Russia, many Crimean Tatars, 12 percent of Crimea's largely ethnic Russian population of about 2 million, have felt insecure due to the possible return of Stalinist-like repression. After the Crimean referendum took place on March 18, many Crimean Tatars were against the result of the referendum in which 97 percent of Crimean residents were allegedly for joining Russia. As they started to live under Russian control, there has been an increasing distrust of new government authorities because of the sad history of their relations with the Russian government. Considering the historical background, the likelihood of the idea of Moscow mistreating Crimean Tatars has led many people to flee the peninsula out of fear of political persecution.