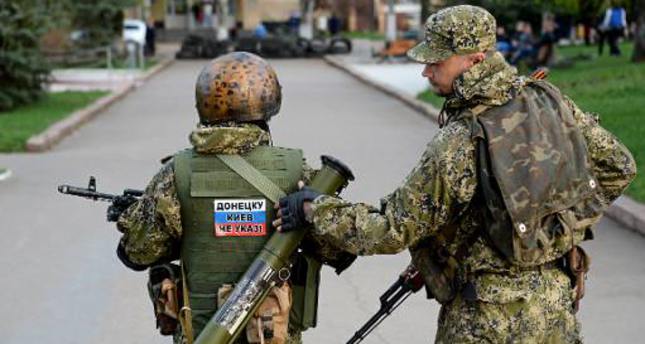 by daily sabah
Nov 19, 2014 12:00 am
In response to the tightened EU measures over the Ukraine crisis, Russia has vowed to pursue its current foreign policy, indicating that Western sanctions are unlikely to make an impact on Russia's stance toward the actions of pro-Russian rebel groups in Ukraine's embattled east.

"The sanctions have absolutely no impact on foreign policy; it has remained unchanged. It will be continued and I believe that it's going to be brought to the end," Andrey Kelin, Russia's permanent representative to the Organization of Security and Cooperation in Europe (OSCE) said in an interview aired on the Rossiya 24 TV news channel on Monday, Russian state-run news agency, Itar-Tass reported.

The EU foreign minister on Monday discussed a new set of restrictive measures on separatists armed by Russia, and a blacklist of persons forbidden to enter the EU countries was announced at the meeting held in Brussels.

"The EU list will apparently get longer. During the day, my Western colleagues kept coming up to me asking how the sanctions were affecting us," added Kelin, further indicating that Russia would maintain its policies over the crisis in eastern Ukraine.

The West has condemned Russian military reinforcements in the restive east as a way to maintain its influence over the separatists. The continued Russian incursion into Ukrainian territory is seen as a violation of Ukraine's territorial integrity, had has also strained tensions between the West and Russia.

As EU leaders prepare to hit Russia by imposing more sanctions, Ukraine authorities warned the EU of future sanctions aimed at hurting Russia. "Sanctions are an important tool for stabilization. Sanctions are not aimed at harming Russia," Ukrainian foreign minister Pavlo Klimkin said after talks with representatives of the European Commission in Brussels, as Itar-Tass reported on Monday. Sanctions on Russia will be discussed at the next summit of EU foreign ministers in December.