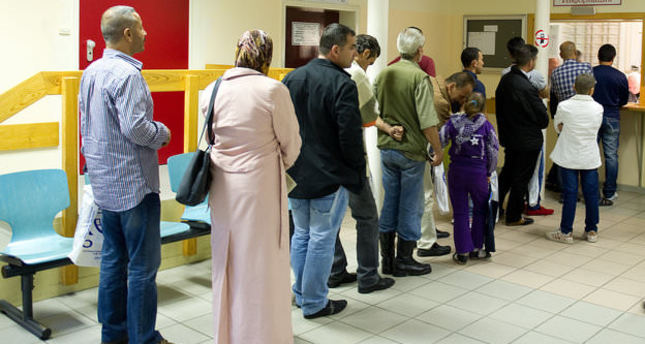 In the face of increasing first-time applications from Syrian refugees looking to gain access to European countries, Germany has pledged to offer shelter to the vast majority of vulnerable Syrians. Yet, only 300 of them are eligible to be resettled

While the number of Syrian refugees reaching Europe is increasing, with only a small number of Syrians having been able to resettle in European countries, Germany has imposed a resettlement quota on Syrians fleeing the war in their country. Germany recorded the highest number of asylum applications in 2013, 109,600 in total, and this number is expected to gradually increase with the worsening humanitarian situation in Syria and the wider region.

However, as Germany is one of the largest recipients of asylum applications among European countries, the resettlement quotas show that only a small number of Syrians can obtain legal status.

Germany has pledged to offer shelter to 20,000 humanitarian admissions with 8,500 individual sponsorships under the resettlement program. As of November 17, "1,114 places were granted until June 30, 2014 and at least 4,500 [are expected to be granted] over the next three years until June 30, 2017," according to the United Nations High Commissioner for Refugees (UNHRC).

The annual resettlement quota of 300 refugees was established in 2011 during the Conference of the Ministers of the Interior of the Federal States for the period 2012-2014. The resettled refugees are admitted into German territory via Section 23 (2) of the Residence Act, as being granted temporary or permanent residence permits on their arrival, as the European Resettlement Network indicated. Syrian refugees resettled under the program "do not receive refugee status but are rather granted a temporary residence permit on arrival in Germany." The periods during which these permits are valid varies across federal states, ranging from 12 months to three years on the basis of the emergency of the situation.

In June 2014, Germany agreed to increase the number of Syrian refugees to an additional 10,000 under its humanitarian admission program. However, compared to Syria's neighboring countries, the UN refugee agency needs to encourage European countries to do more to share the burden over the international community on the Syrian refugee problem. Even though the number of Syrians who have fled from violence has been increasing, the percentage of refugees heading to Europe remains small with around 4 percent of Syrians having sought asylum in European countries. The neighboring countries - Turkey, Lebanon, Jordan and Iraq - have been hosting over 3 million Syrian refugees; a number that is not comparable with the total number of Syrian refugees that have sought shelter in Europe.

The total number of asylum seekers entering the European Union rose to 436,000 in 2013, according to Germany's statistics office Destatis, DPA reported. Nearly 150,000 Syrians have declared asylum in the European Union, while making first-time applications to European countries. However, Europe has pledged resettlement and humanitarian admission for only 34,722 of those who made their first application to receive safety and protection.

With neighboring countries struggling to cope with the influx, European countries have been imposing some restrictive measures on Syrian refugees. In the face of millions of desperate and vulnerable Syrians fleeing the war, among 3,947 Syrian asylum applications in total, Britain has allowed only 24 Syrians to reside in the country under a special relocation program for refugees, according to data released in June by the Guardian. As Britain declined to participate in the U.N.-administered resettlement program for displaced people, British Prime Minister David Cameron offered a "relocation scheme" for vulnerable Syrian refugees in January 2014. The scheme covers five years of "humanitarian protection, including benefits and the possibility of family reunification." Yet, this proves that Britain falls far behind in ensuring safety and treatment for Syrian refugees as they seek shelter in Europe.

Ensuring access to asylum for refugees, including at sea or land borders, remains a significant challenge for European countries. The UN refugee agency has called on EU member states to fulfill their international protection obligations. "Ensuring adequate standards of treatment for them as they seek safety in Europe should be a priority for every European State. In the EU, this is an opportunity to cooperate within the context of the Common European Asylum System (CEAS) to respond to challenges and ensure high standards of protection in all Member States," said the report "Syrian refugees in Europe," released by the UNHRC in June 11, stressing the necessary measures for Europe to ensure solidarity and protection for Syrian refugees in order to provide better human conditions.