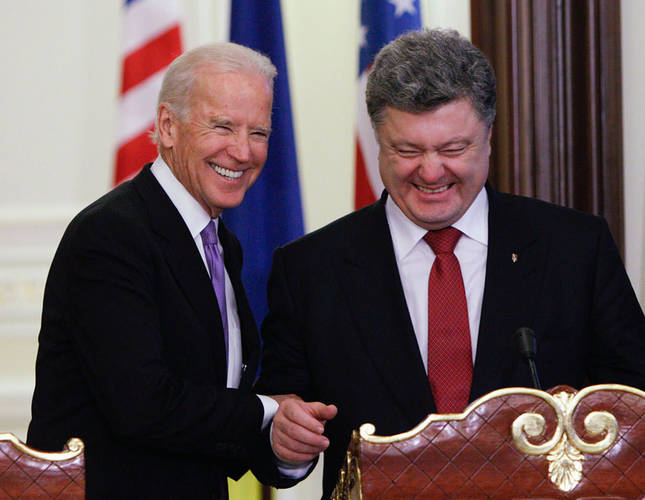 by Daily Sabah Nov 21, 2014 12:00 am
U.S. Vice President Joe Biden arrived in Ukraine on Friday to hold talks with Ukrainian President Petro Poroshenko over the increasing tension in the country's embattled east. Amid an impending proxy war between the U.S. and Russia over the crisis in Ukraine, Russia warned the U.S. of increasing arms supply to Ukrainian combat forces fighting Russian-backed separatists in rebel-held areas. Russia and pro-Russian separatists consider Biden's visit to Kiev as escalating the tension between Russian and the West while also damaging the already fragile peace process.

"The aim of Biden's visit to Kiev is the disruption of the peace process. Washington's proposals to change the Minsk format of talks for some other may lead to re-escalation of the conflict. Americans want to get into the process themselves to weaken the European Union's peacemaking positions," said deputy chairman of the people's council of the self-proclaimed Donetsk People's Republic (DPR), Denis Pushilin, on Friday, as reported by Russian Itar-Tass state-run news agency.

"Washington openly states that it is necessary to supply lethal weaponry to Kiev. Thus, the United States proposes a new war instead of Minsk talks," added Pushilin.

U.S. authorities neither accepted nor denied the possibility of providing lethal aid to Ukraine, stating that the U.S. would "continue to assess" Ukraine "to defend itself against this continued aggression."

"Well, our position on lethal aid has not changed. Nothing is off the table, and we continue to believe there is no military solution. But we, in light of Russia's actions, as [the U.S. Deputy Secretary of State Nominee Anthony Blinken] mentioned yesterday in his testimony, this is – as he indicated – this is something that we should be looking at," U.S. State Department spokesman Jeff Rathke said in a daily press briefing on November 20. The statement comes after Blinken's claims over possible U.S. assistance to supply defensive lethal equipment to Ukraine. "One element that could hopefully get [Russia] to think twice and deter them from further action is strengthening the capacity of the Ukrainian forces, including with defensive lethal equipment," Blinken said on September 19 at the U.S. Senate hearing.

He also announced that about $116 million would be provided in security assistance to the Ukrainian government forces. This would include advising and training to Ukrainian combat troops, "send[ing] advisory teams to Kiev to help improve Ukraine's combat medical care and to identify areas for additional security assistance."

Meanwhile, Russia denied charges over sending illegal alleged humanitarian aid convoys to provide lethal assistance to pro-Russian separatists, while claiming that it disbursed $1 million for humanitarian aid to eastern Ukraine in order to finance the activities of the International Committee of the Red Cross (ICRC) in southeastern Ukraine, according to Itar-Tass news agency.

However, Russia's increased militarization of the rebel-held areas in the Donbass region and its explicit support of pro-Russian separatists seeking a regional leadership close to Russia was criticized by the West and NATO, who warned that a full-scale war is at the border. Tension in the restive eastern part of Ukraine increased after the arrival of columns of Russian military reinforcements in the east of the country, which led to deterioration in the relations between the West and Russia.