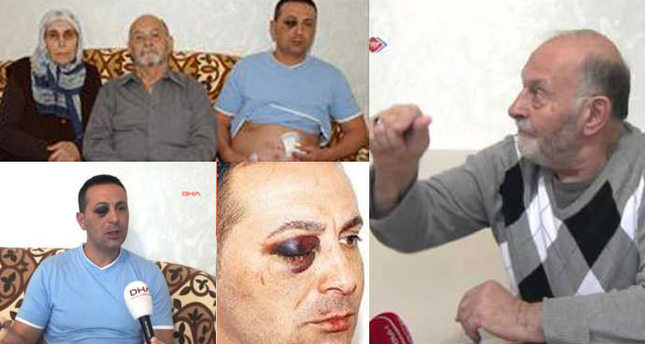 A Turkish family who has been the victim of police brutality and xenophobia in the North Rhine-Westphalia state of Germany has been waiting for justice to be served for the past two years, following the wrongful charge of harassment against their son, despite his innocence.

The Tiryaki family's life changed when their son Cengiz Tiryaki went outside for a smoke late at night. Tiryaki stated that he wanted to smoke but did not want to disturb his old parents at home as his 72 year-old father had lung disease and his mother had recently been through surgery. He smoked in front of his doorstep and headed back home but a man and a woman appeared before him and told him to put his hands up and get on the floor. Tiryaki hesitated, as the two people were wearing civilian clothes and refused to show their id when he asked them for it. "I did not do anything, why should I get on the floor?" said Tiryaki, who was then ruthlessly attacked by the undercover police.

While the woman held Tiryaki, the man hit his eye with his pistol's grip as Tiryaki found himself being kicked on the floor. He stated that he screamed for help as his eye was seriously injured but the officers refused to stop and set a dog on Tiryaki which bit him on his stomach and his back. They verbally abused him by yelling offensive and racist words like "Dirty Taliban". His scream for help woke his parents who ran down to rescue their son. His 72 year old father, Ihsan Tiryaki, was punched by the police while his mother, Ikafat Tiryaki, was kicked in the stomach which had recently had surgery.

Dormagen city police of North Rhine-Westphalia state has issued a statement claiming that there has been a sexual harassment case on the day of the incident and the police officers thought Tiryaki's features matched the description of the perpetrator. "Our officers introduced themselves and asked the suspect to show his id but the latter resisted" read the statement, which claimed that a quarrel took place between the police, the suspect and his family. The statement also claimed that the police were threatened and violently attacked.

When the case made it to the court, the judge called Tiryaki family's lawyer and told him that Cengiz Tiryaki should enter a guilty plea and receive a six month sentence, while stating that he would also arrest the parents if they continued to act as witnesses. A German teacher who preferred to remain anonymous has also stated that he/she was threatened when he/she pledged to testify as a witness amidst the judge, who did not take this into consideration.

Cengiz Tiryaki was sentenced to ten months in prison despite the fact that the girl who was sexually harassed has testified that Tiryaki was not the perpetrator. "It was not Cengiz Tiryaki, but the police forced me to say that it was him" said the victim, who noted that she knows the real perpetrator but would not say his name.

The Tiryakis have appealed the ruling and claim that the police threaten them every time they attend a hearing. It was reported that they have spent about 20,000 Euros over the two years to cover the legal costs of the case.

About three million people of Turkish origin reside in Germany, forming about 3.7% of the country's total population.

It is reported that xenophobia targeting Germany's Turkish minorities is growing and discrimination against Turks living in Germany takes place in a number of everyday situations.

A recent report prepared by the Turkish Parliament's Human Rights Committee has concluded that the frequency of arson attacks targeting mosques in Germany has increased while suspects remain at large. While an average of one or two attacks took place between 2001 and 2011, this average rose to three attacks per month in 2011, while between 2012 and March 2014 over 75 mosques were attacked.