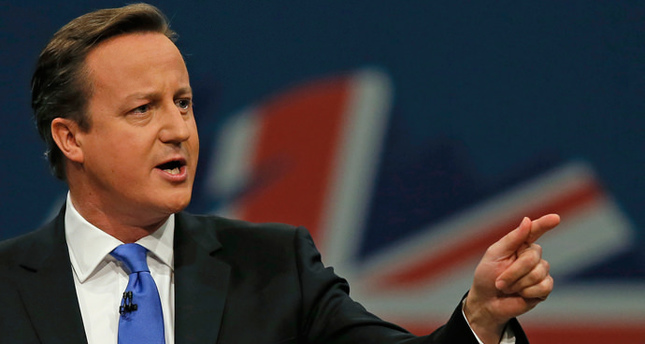 by Daily Sabah with Reuters
Nov 29, 2014 12:00 am
British Prime Minister David Cameron set out plans on Friday to limit immigration from the European Union as he seeks to woo disgruntled voters less than six months ahead of a national election.

With polls showing immigration is voters' top concern, British PM Cameron has been under pressure to take a tougher line on the issue. Many of his Conservative lawmakers fear the rise in popularity of the anti-EU UK Independence Party, which this month won its second seat in
parliament, threatens their re-election chances.

Under the EU's freedom of movement rules, EU citizens are entitled to work anywhere in the bloc. That has seen hundreds of thousands of EU nationals come to work in Britain, which has the bloc's fastest-growing economy.

Figures published on Thursday showed 228,000 EU citizens had moved to Britain in the year to June alone -- the highest recorded figure -- adding political pressure on PM Cameron to act.

The UK Independence party (UKIP) and parts of the Conservative party say the public is unhappy about what it perceives to be abuse of the welfare system by unemployed EU migrants and is worried that those migrants who do find jobs are depressing wages.

Britain has already cut access to social security payments for EU migrants this year, tightening the eligibility criteria, increasing the waiting period before migrants are entitled to payments and halving the length of time for which they can claim unemployment and child benefits.

Measures announced on Friday include plans to ban EU migrants from claiming welfare handouts for low-wage earners until they have paid a certain amount in taxes.

However, a senior Conservative minister said last month the government was also considering limiting the number of EU citizens allowed to work in Britain -- a proposal that would put London on a collision course with its EU partners.

German Chancellor Angela Merkel and former European Commission President Jose Manuel Barroso are among those who have warned Britain against trying to tamper with the EU's principle of freedom of movement.

Local media have reported that Cameron could also ask the EU for "an emergency brake" to restrict migrant numbers if and when they are deemed unmanageable and that he will make clawing back control of Britain's borders "a red line" in any future renegotiation with the EU.
Cameron has promised to try to reshape Britain's EU ties before holding a referendum on EU membership in 2017 if he is re-elected next year. His speech outlined what changes he hopes to negotiate with his wary EU partners.

Migration to Britain from other countries in the EU has been a sensitive issue. There has been growing concern over the increasing number of immigrants living in the country. This has led to an increase in votes for the anti-EU and anti-immigration party UKIP over the past year. Amid Britain's call for EU reforms, Britain wants its demands to be heard in order to encourage its citizens to cast a "no" vote in the in/out referendum on British membership in the EU.

As PM Cameron hardens his line on immigration, the EU officials stated that the new British immigration cap would breach EU law; therefore, a change in the free movement of EU citizens would be impossible to implement as it creates "first- and second-class citizens" within the EU. The free movement of people has been guaranteed as one of the founding principles of the Treaty of Rome in 1957.