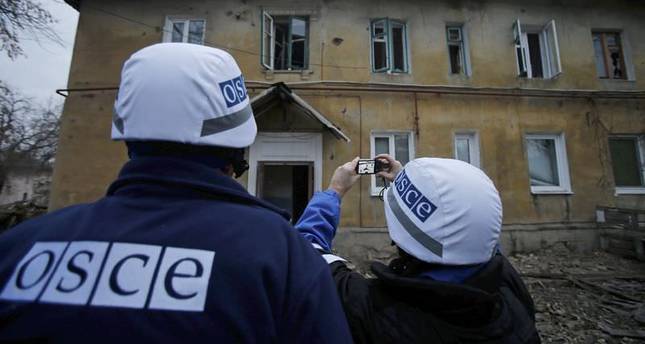 by Daily Sabah Dec 02, 2014 12:00 am
As the fragile situation continues on the ground in the war-torn east of Ukraine, Ukraine government forces and pro-Russian rebels have agreed to end the hostilities in the Lugansk region. Under the new agreement, the hostilities are to cease on Friday. Despite the truce signed on Sept. 5, the agreement has been violated many times, turning the rebel-held areas into a battle zone since the conflict erupted earlier this year.

"All agreed in principle to a total cease-fire along the entire line of contact between Ukrainian Armed Forces and those under control of the Lugansk People's Republic, to be effective from Dec. 5," the Organization for Security and Cooperation in Europe (OSCE) said in a statement released on Monday. "They also agreed that the withdrawal of heavy weapons would start on Dec. 6," the statement added.

The Lugansk region has deteriorated severely since the hostilities erupted. "Ninety percent of civilian houses and apartment blocks have been seriously damaged by shelling," OSCE said, revealing the worsening humanitarian situation in the area, thus underscoring the urgent need for a cease-fire. In addition to the Lugansk region, instability has prevailed in the eastern cities with the establishment of the pro-Russian rebels' self-proclaimed Donetsk People's Republic in April. Many Ukrainians have been forced to flee the war to other parts of the country due to the worsening humanitarian conditions.

With the West keeping up the pressure on pro-Russian rebels and Moscow to implement the Minsk accords of Sept. 5 to achieve peace in the east of Ukraine, heavy fighting continues in the embattled east with Russia sending more military reinforcement to the rebel-held areas. OSCE reported that another humanitarian aid convoy belonging to Russia was spotted in the Donetsk region on Monday.

Regarding Russian military deployment, the U.S. President Barack Obama discussed "Russia's destabilizing actions" in eastern Ukraine with the European Council President Donald Tusk in a phone call while urging Russia to not violate the Minsk agreement. "The leaders agreed that sanctions against Russia cannot be eased until Russia meets its commitments under the Minsk agreements, and reiterated the joint U.S. and EU condemnation of Russia's occupation and attempted annexation of Crimea," said the White House in a statement released on Monday.

"The leaders assessed what further actions may be necessary in response to Russia's destabilizing actions in eastern Ukraine and Crimea," the statement added.

Since the fighting erupted, more than 4,000 people have been killed and 8,756 wounded in eastern Ukraine, according to U.N. figures.

The ongoing armed conflict has left many people in worsening humanitarian conditions as some armed groups continue to terrorize civilians in areas where the conflict has been continuing.