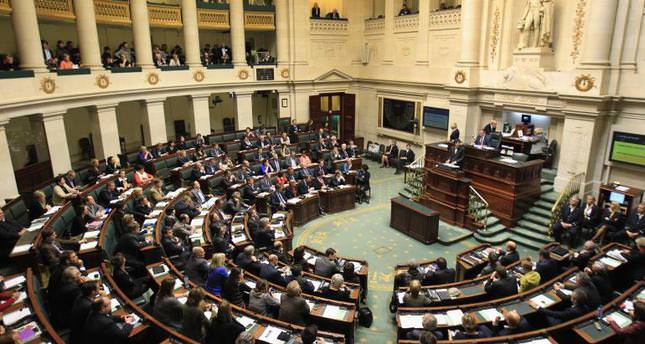 by Daily Sabah Dec 03, 2014 12:00 am
After Sweden, Belgium would be the second EU member state to recognize Palestinian statehood. A resolution on Palestine is now on the agenda of Belgium's main political parties, as the Belgium parliament is expected to debate the resolution of whether to accept the motion to recognize the state of Palestine or not. There is no date set yet to announce the Belgium government's acceptance of the draft text for the planned motion. The vote in the Belgium parliament came after a similar vote by the British House of Commons, France's lower house of parliament, Ireland's senate and Sweden's decision to recognize a Palestinian state.

The symbolic move has significant value for Palestinians to end Israeli occupation in the Palestinian territories in the pursuit of international recognition. European countries give significant importance to the two-state solution while favoring the formation of an independent Palestinian state.

France's lower house of parliament voted 339 to 151 in favor of a symbolic motion to recognize Palestinian statehood. Ireland and the U.K. also accepted the motion on Palestine; however, these moves are considered largely symbolic, as it is unlikely that they will change policy.

The recent Israeli onslaught on Gaza this past summer brought Palestinian statehood to the top of the agenda of Europe's political parties. As part of the efforts for Palestine's international recognition, the U.N. vote in 2012 gave Palestine the status of observer non-member state. A total of 138 members voted in favor of Palestine with only nine voting against and 41 nations abstaining.

In light of the increasing anger among EU member states regarding violence directed towards Palestinians, the EU recently announced restrictive sanctions against Israel. Palestinians have become increasingly vulnerable due to Israeli's aggressive policies towards the Arab community, both on the Gaza Strip and in Jerusalem, and tension flared up after the Jewish state bill, which eliminates the democratic character of Israeli state, was proposed. The loss of Israel's democratic nature would likely cause the Palestinian community to face growing discrimination.