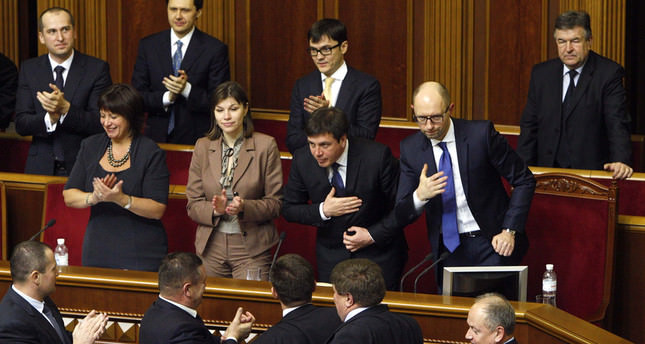 by Anadolu Agency Dec 04, 2014 12:00 am
Ukraine's parliament approved the formation of a new government Tuesday, bringing an end to weeks of behind-the-scenes political wrangling following an October election that ushered in a group of pro-Western parties. The new Cabinet has come together as government troops and Russian-backed separatist forces agreed on a tentative cease-fire in one war-stricken region along the Russian border. That may provide much-needed breathing space to a national leadership that will have to work fast to keep the anemic economy from collapse. With the backing of parliament now secured, Prime Minister Arseniy Yatsenyuk, 40, will continue in a position he has occupied since February. Five political blocs, including Yatsenyuk's Popular Front party, last month formed a parliamentary coalition that has vowed to enact an agenda of drastic economic and political reform.

Yatsenyuk said the country is exhausted and drained by war, Russian military aggression and political conflict. "The country needs radical changes and reforms," he told parliament before the Cabinet vote. Tasks to be completed by the incoming government before year's end include bringing in laws to give more budget-raising powers to local authorities and reducing the number of taxes, Yatsenyuk said. U.S. Vice President Joe Biden welcomed the formation of the new government. "Today's announcement on the formation of a new government sets the stage for the difficult but necessary process of implementing reforms and delivering results," he said in a statement. "The United States will support Ukraine's new government to stabilize its economy, strengthen democratic institutions, and fight corruption," the statement continued.

New Cabinet ministers include several figures who received Ukrainian citizenship by presidential decree, including Finance Minister Natalie Jaresko, an American with experience working for the U.S. State Department. Many of the ministers in the Cabinet retain their posts, including the foreign, defense and interior ministers. The incoming government has vowed to root out corruption and re-orient Ukraine toward Europe.

President Petro Poroshenko and Yatsenyuk have both said they eventually want to see Ukraine join the European Union and NATO.

Approval of the Cabinet had been expected to sail through parliament. The vote was marred by some last-minute controversy, however, when a group of deputies demanded that ministers be approved on an individual basis. After hours of debate, the Cabinet was approved in the proposed form. The creation of an Information Ministry, which is intended by the government to counter what it says is a campaign of anti-Ukrainian disinformation by Russian state media, has also been greeted with ample criticism. International media rights watchdog Reporters Without Borders says the new ministry would undermine independence of the media in Ukraine.

Russian state media routinely casts the conflict as one between an extremist nationalist leadership in Kiev and a minority of Russian speakers in the east fighting for its rights and traditions. Some respite in the conflict is expected later this week if a truce deal between the Ukrainian government and rebels in the Luhansk region comes into effect. Cease-fire deals have been reached before in eastern Ukraine, only to be swiftly violated.

Meanwhile, Yatseniuk said on Wednesday an accident had occurred at the Zaporizhye nuclear power plant (NPP) in south-east Ukraine and called on the energy minister to hold a news conference. "I know that an accident has occurred at the Zaporizhye NPP," Yatseniuk said, asking new energy minister Volodymyr Demchyshyn to make clear when the problem would be resolved and what steps would be taken to restore normal power supply across Ukraine. News agency Interfax Ukraine said the problem had occurred at bloc No 3 - a 1,000-megawatt reactor - and the resulting lack of output had worsened the power crisis in the country. Interfax added that the bloc was expected to come back on stream on Dec. 5. Compiled from wire agencies