Anniversary of police shooting of teen sparks clashes in Greece 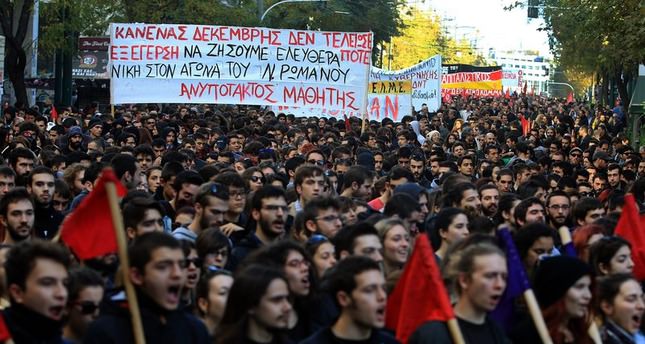 by Dec 06, 2014 12:00 am
Clashes broke out Saturday between riot police and demonstrators marching in Athens to mark the anniversary of the fatal shooting of an unarmed teenager by police that led to widespread rioting six years ago.

Hundreds of students, left-wing activists and self-styled anarchists threw stones and Molotov cocktails at police, who responded by firing tear gas as 5,000 protesters marched towards Parliament.

Dozens of store windows were damaged during the stand-off, and demonstrators set fire to rubbish bins throughout the city centre. At least 21 people were arrested, police said.

Hours earlier, about 8,000 protesters gathered in a largely peaceful demonstration in central Athens while minor clashes were reported in the northern port city of Thessaloniki.

Fifteen-year-old Alexis Grigoropoulos was killed in 2008 by a policeman who fired his gun after an argument in the Athens suburb of Exarchia.

The incident sparked two weeks of riots by tens of thousands of youths.

This year's anniversary coincided with an ongoing hunger strike by one of Grigoropoulos' friends, 21-year-old convicted bank robber and self-styled anarchist Nikos Romanos.

Romanos, who is currently in jail, was at the scene of the Grigoropoulos' shooting and is demanding prison leave to attend classes after passing university entrance exams.

Doctors said the health of Romanos, who has been on a hunger strike since last month, is deteriorating. He has been hospitalized under police guard.

Police arrested Romanos in 2013 along with three other people after they tried to rob a bank and took a person hostage. Romanos' police mugshot emerged after his arrest showing his face to have been badly bruised.

Prime Minister Antonis Samaras is scheduled to meet with Romanos' parents Monday after reports said Romanos turned down the government's offer to allow him to take a college correspondence course.