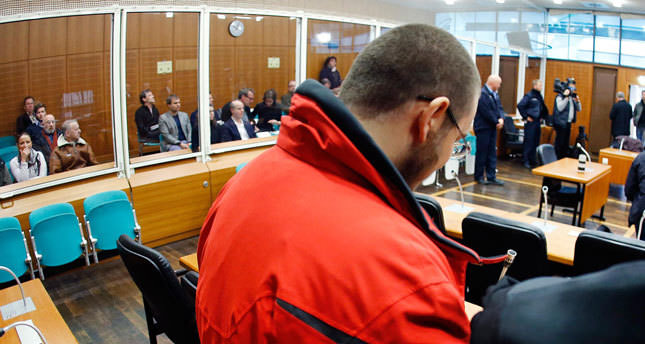 by Daily Sabah Dec 06, 2014 12:00 am
The first German convicted of joining Islamic State of Iraq and al-Sham (ISIS) forces in Syria was sentenced to 45 months in jail on Friday. This was the first German court case to give a verdict for such a case.

Kreshnik B., 20, a German national from Kosovo, left Germany in July 2013 to join ISIS in Syria. He reportedly spent six months there fighting and being trained by ISIS militants. He was arrested when he landed at Frankfurt Airport after he decided to return to Germany. He was convicted under the German youth law on the grounds that he was technically not an adult when he departed.

European countries are attempting to deal with the threat posed by ISIS militants by inspecting suspicious people and groups such as the work Belgium has been doing with the group, Sharia4Belgium. Thousands of European militants continue to enter Iraq and Syria to fight with ISIS against the Syrian regime, Western-backed opposition groups, armed Kurdish factions, Iraqi forces and the U.S.-led anti-ISIS coalition.

About 550 German citizens have reportedly traveled to Syria and Iraq in order to join ISIS and about 60 have been killed during the heavy clashes, according to Reuters. Sweden is also one of the European countries whose citizens have left to fight for ISIS.

Britain and France are also toughening counterterrorism measures in order to stop the flow of Europeans going to Syria and Iraq to combat alongside extremist groups. France last month sentenced a returning militant who spent 10 days in Syria to seven years in prison in the first verdict of its kind there. Britain also sentenced two brothers to four and three-and-a-half year prison terms for joining ISIS forces in Syria. In the face of the growing number of British Muslims traveling to the Middle East to take part in ISIS, Britain has started taking serious measures to tackle the increasing radicalization of British Muslim youth.

Ever since the rise of ISIS, European countries have been increasingly anxious about their countries turning into ISIS-recruiting hubs. Counter-terrorism measures and the threat posed by Europeans joining ISIS were discussed in Brussels on Friday by EU interior ministers. "Issues such as passport checks at external borders, the judicial handling of returning fighters, information exchanges on suspects, efforts against radicalization and cooperation with transit countries" were discussed during the meeting.

"Together, we must and want to prevent these people leaving to export terror. And we want to especially prevent them from returning as fighters to carry out attacks in Europe," German Interior Minister Thomas de Maiziere said, as reported by dpa.