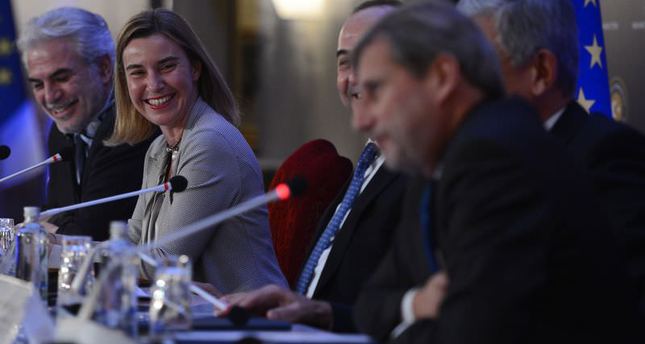 The EU Commission is set to provide a financial aid package to Turkey for sheltering thousands of refugees who have fled from conflicts in Syria and Iraq. Turkey has spent $4.3 billion in humanitarian aid through its official channels and non-profit organizations since the Syrian civil war began.

"We are finalizing a further package of 70 million euros to Turkey," High Representative of the EU for Foreign Affairs and Security Policy Federica Mogherini said at a press conference with Foreign Minister Mevlüt Cavuşoğlu and Minister for EU Affairs and Chief Negotiator Volkan Bozkır of Turkey in Ankara on Monday.

As Turkey has opened its borders to nearly 2 million Syrian refugees, EU policies toward asylum seekers continue to raise eyebrows. Both Turkey and the U.N. have previously urged EU countries to resettle Syrian refugees looking for shelter in their countries. Even though the Syrian refugees are increasingly in need of shelter, only a small number of war-torn Syrians have found refuge under the roof of EU countries.

According to the EU, almost 60,000 Syrian refugees have applied for political asylum since the start of the current conflict in Syria, the majority in Germany and Sweden.

According to government officials, Turkey presently hosts nearly 2 million Syrian refugees who fled the violence that surfaced with the civil war in 2011, and is continuing apace with the rise of the ISIS threat in their native land.