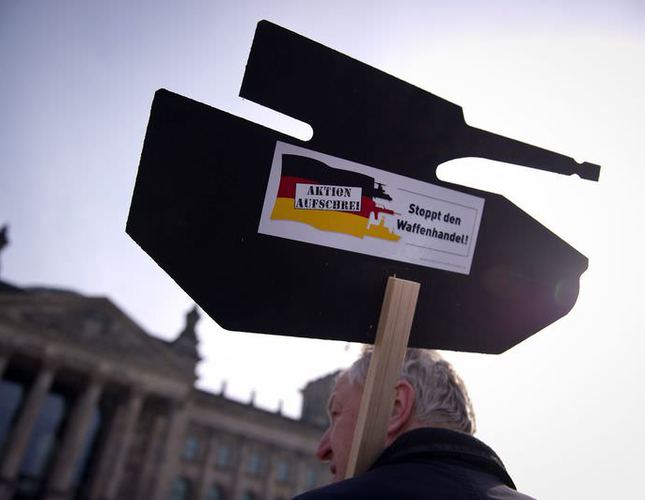 by AA Dec 08, 2014 12:00 am
Germany should stop arms exports to conflict regions in the Middle East and Northern Africa, a joint Protestant-Catholic study group has declared in a report.

The Joint Church and Development Conference (GKKE), a non-profit group of Protestants and Catholics in Germany which researches peace and conflict, said in its annual report the nation's arms sales to the Middle East and North African countries had risen to $2.36 billion in 2013 from $1.42 billion in 2009.

The group stated in its report released on Monday: "We are concerned about the growing significance of Middle East and North Africa countries in German military exports."

"In view of the considerable criticism of human rights situation in some of these countries, and comprehensive observations on the situation of the internal conflicts there, GKKE opposes arms exports to these regions," it said.

The group also said the country's overall share of global arms exports had increased to seven percent in 2013, reaching a total turnover of $5.8 billion.

Prelate Dr. Karl Juesten, Catholic co-chair of the GKKE, criticized the record increase in arms exports to "third countries" - a term referring to states which are not members of the EU or NATO.

While the German government has a more restrictive arms sales policy towards non-EU or non-NATO member countries, the share of these third countries in total military exports had reached a record level of 63.5 percent in the first six months of 2013, according to the report.

"What has been thought of as an exception, has now become a rule," Juesten said, singling out the German government's approval of a sale of 146 patrol boats to Saudi Arabia and hundreds of Panzer tanks to Algeria.

Juesten said the recent efforts of Germany's conservative-left coalition government towards a more restrictive and transparent policy on arms sales was important, but had been insufficient to date to make a change in policy.

"We cannot talk about a policy change until arms exports to third countries, conflict regions and states countries with worrying human rights situation decreases in a significant and persistent way," Juesten said.

He also spoke critically of arms sales to Israel.

He said: "We are not comfortable with the developments in Israel. The situation there is very tense.

"The basic principle of not exporting arms to conflict regions should also be relevant for the friends."

Israel has been among Germany's key partners in terms of arms sales.

Among Germany's leading arms export markets are the U.S., which takes 10 percent of its arms, Greece eight percent and and Israel eight percent.

Founded in 1973 by the two largest churches of Germany, GKKE has been monitoring Germany's military exports since 1997 and publishing annual reports on developments in the country's arms exports policy.