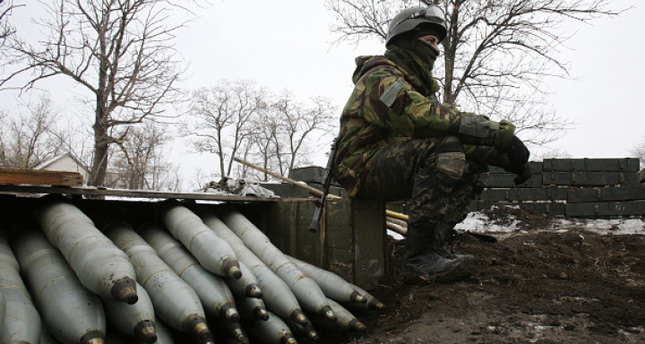 by Daily Sabah Dec 10, 2014 12:00 am
The Kiev administration declared a "day of silence" yesterday to gear up for peace talks with pro-Russian rebels who have declared a self-proclaimed republic in Donetsk. Although Kiev wanted the peace talks to start on Tuesday, the rebels said the talks should start on Friday. However, Ukrainian Defense Minister Stepan Poltorak said that the two sides had reached a "preliminary agreement" to cease fire in a "day of silence" on Tuesday. "We shall see if it is going to be honored," he was quoted as saying by Interfax. Although the date remains unclear, "We expect that the first and most important point of agreement is a permanent cease-fire. It's only after Tuesday's truce that it will be possible to withdraw heavy weaponry to 15 km from the front line," explained Andriy Lysenko, spokesman for Ukraine's National Security and Defense Council. "I believe we have to stick to our strategy on renewing control over the occupied third of eastern Ukraine through diplomatic and economic pressure on Russia. This is why a meeting in Minsk is one of the steps in this direction," said Yuriy Lutsenko, spokesperson for "Petro Poroshenko Bloc."

While the two sides were beginning peace talks, Germany and Russia continued to accuse each other of interfering in Ukraine's domestic issues and escalating tension. German Chancellor Angela Merkel said in an interview in the Die Welt am Sonntag newspaper, "Russia was 'creating problems' for Moldova, Georgia and Ukraine that have the sovereignty to make their own decisions. Russia's violation of the territorial integrity of Ukraine must not be allowed to stand." Merkel said it might take a lot longer than previously envisaged to reach a diplomatic solution. "We're going to need more patience than we first imagined," she added. While Putin's adviser Yuri Ushakov said Russia would do everything it could to enable the talks to go ahead this week, Ukrainian Prime Minister Arseny Yatseniuk urged Moscow to fulfill its obligations under the September deal.

"If Russia continues its aggressive policy towards Ukraine and the whole world, it will have to continue paying the price," Yatseniuk was quoted as saying by his news service, referring to Western sanctions against Russia.