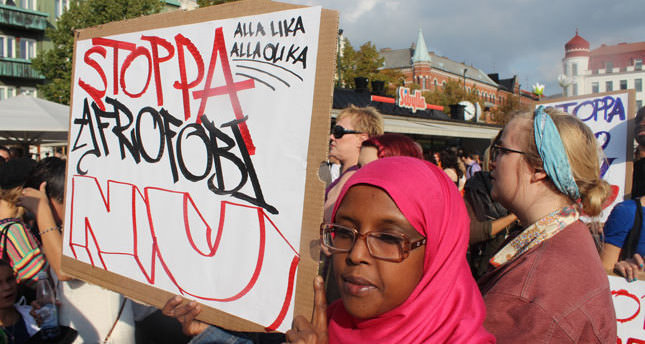 The United Nations warned Sweden of growing ‘Afrophobia,’ hostility toward people of African descent, as Afrophobic hate crimes against Sweden’s black population have been on the rise

Sweden, a European country known for its long history of openness and tolerance, now suffers from growing racial discrimination towards people of sub-Sahara African descent. In response to "a heightened xenophobic and racist attitude against migrants and refugee communities with African descent," the United Nations called on the Swedish government to take significant measures to end "Afrophobia" within the country.

"Afro-Swedes and Africans with whom we met expressed their experiences of multiple forms of discrimination based on their skin color, race, religion and sex," the U.N. human rights experts said, following a five-day official visit to Sweden. The working group urged the Swedish government "to develop a Human Rights Strategy and other measures that would address racial discrimination against Afro-Swedes and Africans."

Afro-Swedes and Africans living in Sweden have been subjected to racist acts, becoming the most vulnerable group in Swedish society. Sweden's African community has been discriminated against due to "the lack of equal access to justice, racial profiling and the failure to effectively investigate, prosecute and deter Afrophobic hate crimes." "We are concerned that [the possible failure of the Swedish government to fight against injustice] creates feelings of mistrust in law enforcement bodies among communities, and discourages them from accessing help when they themselves are victims of crime or rights abuses," the U.N. experts said.

The number of hate crimes against Sweden's black community is on the rise. Reported cases of hate crimes against Afro-Swedes rose by 24 percent, according to a Swedish government report released in February. The report reveals that Afro-Swedes are among the minorities most exposed to hate crimes. "This report is a wake-up call to the Swedish government to take Afrophobia seriously and to develop a specific strategy and measures to tackle the racism that 180,000 black people in Sweden face on a daily basis. We cannot claim to have a first-class democracy and yet [also] have second-class citizens," European Network Against Racism (ENAR) Vice-Chair Jallow Momodou said, stressing that Afrophobia is a widespread phenomenon in Sweden.

As hate crimes prevail within the country, Sweden was hit by riots over the weekend. During heavy clashes between protesters and police in a poor suburb in Sweden's capital of Stockholm, 11 young people were arrested for rioting and arson. Many Swedish suburbs with a large immigrant population have been hit by violence, as many fear that it could further boost the far-right anti-immigration movement in Swedish society.

Sweden's reputation as an open society has been deteriorating as more people of African descent are subjected to racial discrimination. As the world continues to suffer from conflicts and political extremism, Sweden received the most asylum applications in the world from 2009 through 2013, according to the U.N. refugee agency, and the country expects that the number of asylum seekers in 2015 will break records. "Our society should be prepared to receive between 80,000 and 105,000 asylum seekers in 2015," said Sweden's Migration Board, the government agency in charge of handling immigration issues. Sweden's refugee policy is also praised by many international humanitarian agencies, as it stepped up its efforts for Syrians by granting permanent residency to refugees fleeing the conflict. In light of the worsening humanitarian crisis in Syria, Sweden opened its borders to all Syrian asylum seekers by granting them permanent residency.

However, Sweden's liberal policy towards refugees has resulted in decreasing tolerance in Swedish society toward immigrants. In the face of a massive influx of refugees and asylum seekers, Swedish nationalism has been on the rise, as far-right groups are deeply critical of the center-left government's policies towards immigration. The Swedish Democrats, a nationalist party that is also the third largest, favors deep cuts to immigration, as there have been growing hostilities towards immigrant communities. The Swedish Democrats made significant gains in the general election in September, which demonstrated the increasing impact of far-right groups on the Swedish political arena and indicated that the growing number of refugees likely contributed to the rise of the far right.

Sweden, with a population of 9.6 million, is Europe's most liberal country in the face of a growing immigrant population. Sweden is also home to at least 180,000 Afro-Swedes.