UN calls on Europe to save migrant lives 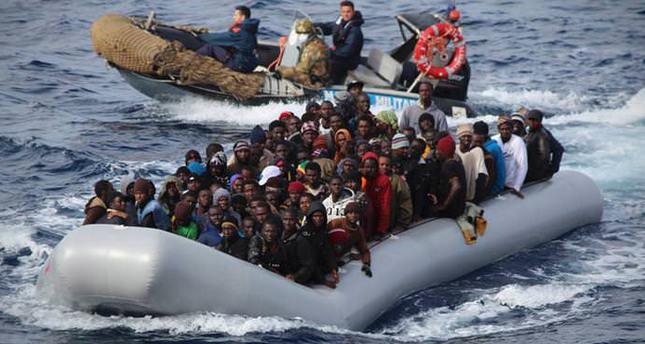 by Daily Sabah Dec 11, 2014 12:00 am
As the number of desperate people fleeing conflict and war in order to reach Europe by the sea increases, the Office of the U.N. High Commissioner for Refugees (UNHCR) urged countries to prioritize human lives and focus on saving migrants, instead of considering border security issues first. More than 3,400 people have reportedly drowned in the Mediterranean trying to reach Europe in 2014.

In response to tightening measures imposed by EU countries on migrants risking their lives in sea crossing, U.N. High Commissioner for Refugees António Guterres said, "This is a mistake, and precisely the wrong reaction for an era in which record numbers of people are fleeing wars." "Security and immigration management are concerns for any country, but policies must be designed in a way that human lives do not end up becoming collateral damage."

At least 384,000 asylum seekers have risked their lives on sea crossings since the beginning of 2014, according to UNHCR figures. The agency reported that among them, 4,272 died on crossings.

Europe has been facing the largest number of migrants arriving by sea as conflicts in Libya, Iraq and Syria have led considerable number of desperate people to try and reach Europe. "More than 207,000 people have crossed the Mediterranean since the start of January, almost three times the previous known high of about 70,000 in 2011," the UNHCR indicated. However, in the face of growing numbers of people making risky sea journeys in search of asylum or migration to any European country, the joint EU border protection operation dubbed Operation Triton took effect on Nov. 1, and has a more limited scope to save migrants from mass drowning.

Operation Triton is now being criticized due to the fact that the main focus of the joint EU mission is only to manage border security control to keep the massive number of migrants from overwhelming the crossing points. Triton does not operate in international waters, and is instead only active within 30 nautical miles off the Italian coast. The operation is charged with rescuing migrants in need of help as its operational area is limited.

As the majority of people fleeing conflicts and persecution arrived in Europe via the Mediterranean in 2014, at least three other major sea routes have been in use. According to 2014 figures, 82,680 people have crossed the Gulf of Aden and the Red Sea. Among them, at least 242 lives were reportedly lost by Dec. 8. In South Asia, around 54,000 people from Bangladesh or Myanmar risked their lives in order to reach Thailand and Indonesia. Human desperation in conflict-hit areas like Myanmar and Libya causes the emergence of human smuggling networks that profit from conflicts and instability in these regions.