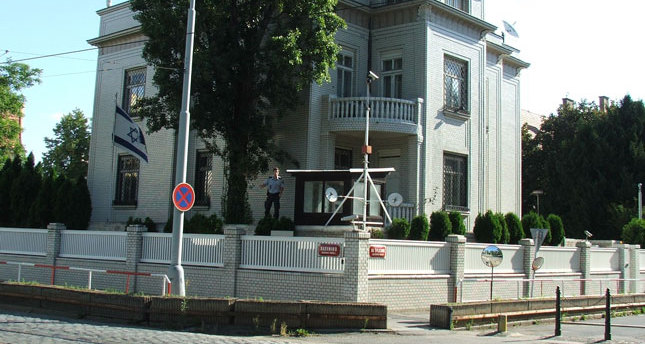 by Daily Sabah Dec 13, 2014 12:00 am
As Israel increases its aggression towards Palestinians living in the West Bank and the Gaza Strip, anger in Europe has been on the rise with many Europeans condemning Israeli policies in the West Bank and Gaza. The Israeli embassy in Athens was fired upon on Friday morning. The shots were reportedly fired from a motorcycle with two persons passing in front of the embassy. The incident came two days after a Palestinian minister, Ziad Abu Ein, died following a confrontation with Israeli soldiers during protests in the West Bank.

In response to Israel's reluctant commitment to a two-state solution to solve the long-lasting Israeli-Palestinian conflict, more European countries have been giving considerable attention to the worsening situation of Palestinians, who continue to face hostility from Israel. Switzerland, the depository state for the Geneva Conventions on humanitarian conduct in conflicts, has organized an international meeting to discuss the protection of Palestinianrights that has long been violated by Israeli authorities in the occupied territories. Israel criticized Switzerland over the meeting on Palestinian's rights, saying that "The conference of signatories is a political move whose sole purpose is to exploit the important stage of the Geneva Conventions for the sake of assailing Israel," the Israeli embassy in Geneva said, DPA news agency reported. Israel's failure to protect the civilian Palestinian population during the 51-day long conflict in the Gaza Strip was criticized by Amnesty International. The human rights group accused the Israeli Defense Forces (IDF) of its deliberate and unjustified bombing of civilian buildings in Gaza during the conflict, calling Israeli actions "a symbolic form of collective punishment."

After the brutal Israeli onslaught on Gaza, Palestinian statehood has been on the agenda of many European countries. Following the Israeli onslaught that brought the near-total destruction of the Gaza Strip, the worsening humanitarian situation in Palestinian territories has gained an international voice that condemns Israeli settlement and actions in the besieged enclave. On Thursday, France's upper house of parliament urged the government to recognize Palestine as a state. The Irish parliament also called for the recognition of Palestine as a state. Sweden is the only European country that officially recognizes Palestinian statehood. The British move came two weeks after Sweden had pledged it would recognize Palestine. However, all European moves, from countries such as Spain, Belgium, the United Kingdom and France, so far have been symbolic. Regarding international support for Palestinian statehood, in the international arena, more than 130 countries have already symbolically recognized Palestine. However the European Union has not yet given it official recognition. The EU called on Israel to lift the blockade on the Gaza Strip, stressing that Israeli commitment to a two state solution would reflect on its EU relations in a positive way.

In addition to the deteriorating situation in the Gaza Strip, the tension in East Jerusalem was exacerbated after Israeli authorities announced the expansion of its settlement project that includes major construction in the area as well as an increase in Jewish settlers. As Israel tries to expand its influence over the enclave by allowing Jewish settlers to reside in the disputed area, the number of Jewish settlers in the occupied territories has doubled in the last four and a half years. The continued settlement threatens the pursuit of peace in the sacred territories through deepening divisions between two communities and further exacerbating the conflict.