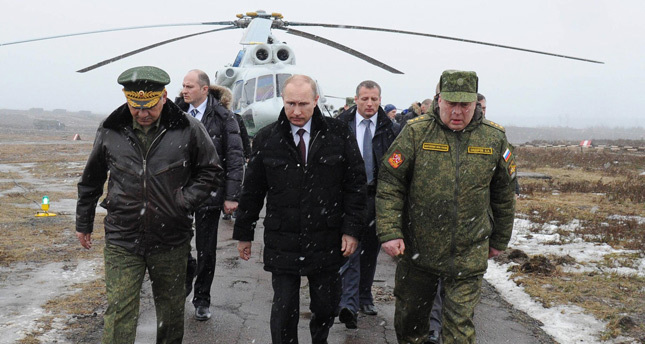 by Daily Sabah Dec 17, 2014 12:00 am
Amid the deepening rift between Russia and Western powers, Russia appears determined to threaten the West with a show of military force in the semi-autonomous Russian enclave of Kaliningrad, nestled between Poland and Lithuania. On Tuesday Moscow ordered snap military drills in the Kaliningrad region, in order to be "militarily prepared and combat ready in the region," as the Russian Defense Ministry claimed. Russian military drills in the enclave were reportedly carried out between December 5 and December 10. The latest Russian move close to Europe's borders comes after tightened economic sanctions were imposed by the United States, along with European Union member states. In the face of EU-imposed sanctions, Russian aggression has increased in a region that includes the ex-Soviet Baltic states, igniting old Cold-War fears and rhetoric.

"[The inspection of the combat readiness of troops] involved up to 9,000 people, 642 pieces of weaponry and equipment, including 250 tanks and armored vehicles, about 100 artillery mounts and salvo systems, 55 naval ships, and 41 aircraft," said a report issued by the General Staff of the Russian armed forces on Tuesday, as reported by Russian state-run news agency Itar-Tass. "The inspectors assessed the combat readiness of the group of troops of the Western military district and its capability to ensure the security of the Kaliningrad region."

As the tension between Russia and the West intensifies, the ex-Soviet Baltic States see Russia as a clear threat to their national security and territorial integrity. After the annexation of Ukraine's Crimean peninsula by Russia in March, there has been growing fear among northern European states that the Cold War years could be making a return. Regarding Russia's aggressive actions in several break-away regions, Russia's increased militarization of the rebel-held areas in the Donbass region, and its explicit support for pro-Russian separatists who are seeking a regional leadership close to Russia, have prompted fears among ex-Soviet states who are now committed to a pro-Western path.

The Kaliningrad region, thanks to its insular position within EU territory, is of strategic importance to the Moscow government, with it serving as a military base in the middle of NATO member states. As Moscow keeps up its pressure over the small enclave of half a million people within Europe, the residents of Kaliningrad have been under European influence despite Russian sovereignty. The Kaliningrad Special Border Agreement which eases the process of crossing the Polish border for the residents of Kaliningrad improved ties between Russia and Poland, and therefore relations with the European Union.

Kaliningrad was part of the Russian Federation during Soviet times. After the dissolution of Soviet Federation, the region remained a Russian gateway to the European Union with the area bordering two ex-Soviet European states where the Russian threat has remained potentially high over the years.