Russia not stepping back from crisis in Ukraine 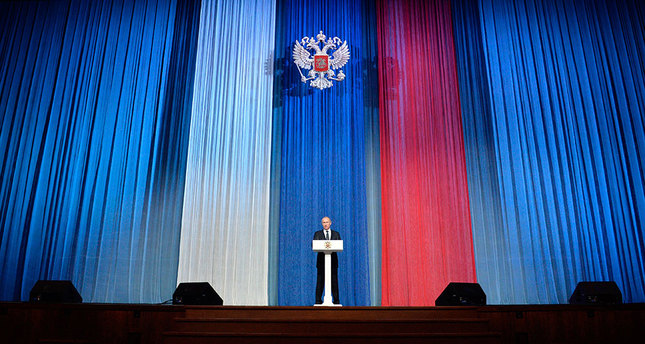 by Daily Sabah Dec 21, 2014 12:00 am
Russia has taken a firm stance despite a grave economic crisis led by tightened sanctions from the EU and U.S. Russian President Vladimir Putin indicated that Russia's foreign policy over Ukraine would persist as the EU and U.S. have accused Russia of intervening in Ukraine's domestic issues, violating the country's territorial integrity and unity. "Evidently, no one will succeed in Russia's intimidation and isolation. It has not been done before and it is never going to happen," Putin said at the State Kremlin Palace at a gala marking the Day of Security Service Officers, according to Russian state-run news agency, Itar-Tass.

"A number of threats and risks are growing, the norms of international law are ignored and no stone is left unturned – blackmail, provocations, economic and informational pressure, stakes on radical elements and nationalist groups as well as attempts to destabilize the internal situation and thus take control of entire countries," Putin said.

As the impact of EU and U.S. sanctions on the Russian economy grows, Russia still continues to send humanitarian convoys to rebel-held areas in eastern Ukraine. The 10th relief cargo to the Donbass region of eastern Ukraine reportedly arrived on Sunday. Russian authorities claim that the convoys carry relief aid to people who are in dire need of humanitarian help. The Ukrainian government, together with the EU and U.S., accused Russia of increasing tension in the region by financing and backing pro-Russian separatist groups militarily.

On Friday, in an effort to halt Russian aggression in the region, U.S. President Barack Obama signed the Ukraine Freedom Support Act, a congressional bill to impose new sanctions on Russia. Obama called on Russia "to end its occupation." As the EU and U.S. prepare to impose a new round of sanctions, the Russian economy is facing hard times, hit hard by current sanctions imposed over the Russian annexation of Crimea and its continued support for separatists in the conflict-hit regions in eastern Ukraine. Its economy is also being hit separately by falling oil prices.

"Introducing new unilateral sanctions against the Republic of Crimea and the city of Sevastopol by the U.S. and European Union is direct evidence that the West has acknowledged that the decision by Crimeans to rejoin Russia was unanimous and voluntary," the Russian Foreign Ministry said in a statement on Saturday, as reported by Reuters, in an effort to condemn the new round of EU and U.S. sanctions against Russian, saying that sanctions would further undermine diplomatic solutions to resolve the conflict in eastern Ukraine. "That is why they chose the 'punishment' to be collective," it added. "It is sad that the countries that call themselves democratic resort to such methods in the 21st century."

Meanwhile, the cease-fire in eastern Ukraine continues, however nominally. Ukrainian pro-European leaders and Kremlin-backed rebels agreed to hold long-delayed peace talks. However, no permanent peace has been agreed upon so far. Efforts between the EU, Ukraine and Russia have not led to a significant improvement to end the months-long pro-Russian separatist rebellion in eastern Ukraine, as talks could not produce a breakthrough in issues relating to the settlement of the crisis in Ukraine. The Minsk Protocol from Sept. 5 and the Minsk Memorandum from Sept. 19 have reportedly been violated many times, as the death toll has continued to increase, and reached around 4,000 people while leaving many Ukrainians in deplorable humanitarian conditions. The crisis in Ukraine started in March with Russia's annexation of Crimea from Ukraine. Since then, the conflict in eastern cities has increased as pro-Russian separatist groups seek regional leadership closer to Russia. As rebels backed by Moscow have been seeking full independence, they declared autonomy of the Donbass region in May through an independence referendum, which was not recognized by Kiev, the EU or U.S.