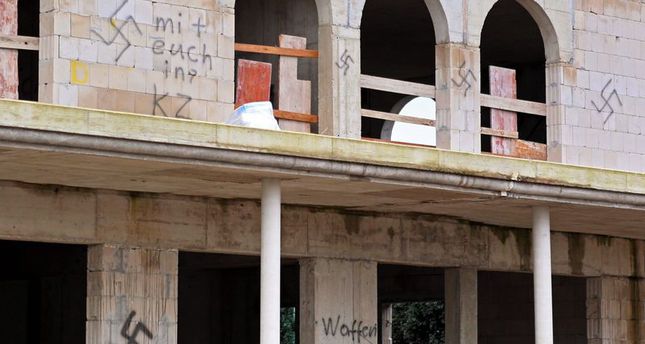 Amid widespread hatred toward Muslims in German society, a half-built German mosque called the "Süleymaniye Mosque" in the northwestern German town of Dormagen was vandalized in the early hours of Sunday morning. The vandals covered the mosque with swastikas and racist graffiti associated with Nazism.

"Off with you to the concentration camp!" was written on the walls of the mosque, a sign of the growing anti-Muslim sentiment in German society. This racially motivated attack on the mosque is believed to indicate that life for Muslims in Germany has become compromised by vandalism and hatred. Around 4,500 Muslim people live in Dormagen, a town in North Rhine-Westphalia, Germany in the Rhein-Kreis Neuss.

The Dusseldorf state security has set up a group to investigate the mosque attack. A reward of 1,500 euros will be given to anyone who can reveal information leading to the apprehension of the perpetrators.

The head of the foundation of the Süleymaniye Mosque, Dursun Pekdemir, spoke to Turkey's state-run Anadolu Agency (AA) saying that the mosque has encountered many attacks since 2012 from far-right groups, who have taken opposition to the building of a mosque.

"We, as the Turkish-Islamic Union for Religious Affairs, would like to reiterate that we fiercely condemn all types of act of vandalism that result in social upheaval [among German society]. We call on German authorities to act responsibly in order to prevent the reoccurrence of such violent attacks towards religious places. We also hope that the perpetrators will be arrested as soon as possible," said Pekdemir.

The mosque attack came after Germany witnessed anti-Muslim demonstrations centered in the eastern city of Dresden under the motto PEGIDA, standing for "Patriotic Europeans against the Islamization of the West." Up to 15,000 people gathered in Dresden chanting anti-immigration and anti-Islam slogans in order to protest the growing number of refugees, with different ethnic backgrounds, coming to Germany.

The growing far-right extremism has sparked hatred toward the Muslim community in Germany, deteriorating peace and solidarity within German society over the last couple of weeks. With the majority of Germans supporting anti-Muslim rhetoric and anti-immigration policies, more people have started to consider Islam as a threat to their society.

In the face of the growing number of refugees and asylum seekers seeking shelter in Germany and the threat posed by radical militant group the Islamic State of Iraq and al-Sham (ISIS), the majority of Germans have been fueling anti-immigration sentiment while calling for more restrictive immigration policies.

Considering the rightward shift in Germany, right-wing parties have long been critical of immigration policies while favoring the full integration of Muslims into German society. German Chancellor Angela Merkel's coalition partner, the Christian Social Union party (CSU), sparked a debate two weeks ago underscoring that immigrants who want to live in Germany permanently should be obliged to speak German both in public and with their families at home, if they want to remain in the country. The proposal, prepared by Bavarian conservatives, prompted outrage as Merkel's government rejected the plan.