Islamophobia triggers social unrest in France and rest of Europe 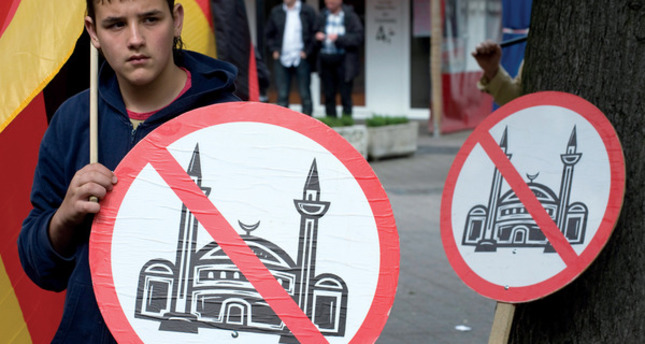 by Daily Sabah Dec 23, 2014 12:00 am
A French television presenter has called on the French government to conduct a mass deportation of an estimated five million Muslims, as he believes that the Muslim population is the main factor that promotes social unrest in French society.

Following the call for the deportation of Muslims on television, Eric Zemmour was dismissed by the 24-hour news channel i-Télé, as reported by the British newspaper The Independent. His dismissal was supported by anti-racist groups. However, many conservative and nationalist politicians considered his call a right to free speech.

In the face of growing anti-Islamic sentiment in France, two men reportedly committed brutal attacks against police and passersby on the weekend in separate towns. Far-right extremism has also been blamed for further deteriorating peace and solidarity in French society. French President François Hollande urged France to exercise "utmost vigilance" on Monday following the attacks.

Anti-immigration sentiments have long been on the rise in many European countries. European attitudes toward minorities living in the EU show that there are considerable negative perceptions of minorities. The negative attitudes are more common among people on the ideological right, paving the way for growing concerns of far-right extremism and Islamophobia in Europe.

Far-right principles, anti-immigration, nationalism and Euroscepticism has found significant support from many Europeans over the past few years. The increasing disenchantment among Europeans with government policies toward currency and debt crises, recession and austerity has led many Europeans to adopt far-right views including growing hatred and intolerance toward migrant communities.

It is important to note that the growing far-right extremism and anti-Muslim rhetoric could lead to a further increase of already existing social tension between Europeans and migrant communities, which has resulted in repeated widespread urban violence and civil unrest.