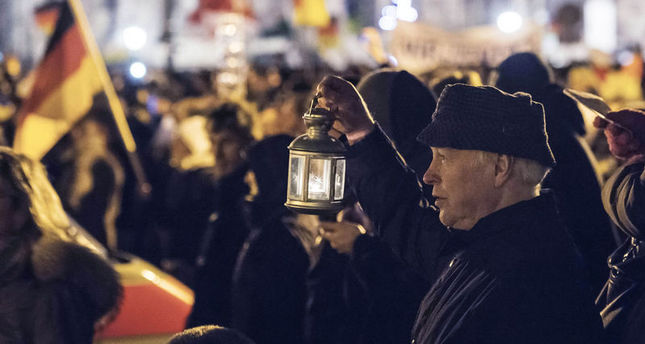 Germany witnessed the largest anti-Muslim demonstration on Monday night with up to 17,500 people reportedly attending protests in the eastern German city of Dresden while chanting anti-immigration and anti-Islamic slogans.

In the face of widespread hatred toward Muslims in German society, some German politicians and religious leaders have condemned the protests, which are being organized by the Dresden-based right-wing group Patriotic Europeans Against the Islamization of the West (PEDIGA), a group that holds anti-Muslim and anti-immigrant views. In response to the growing anti-Islamic feeling, counter-demonstrators also marched through the streets of Dresden to support immigration policies.

Some of the held by protestors banners at the counter-demonstration included statements such as "Our culture is to love people by our side," "Against racism and fanaticism" and "I am not Nazi, so what?" The recent protests and growing far-right extremism could well be sowing the seeds of civil unrest in Germany, which has a high immigrant population and a Muslim community of over four million people.

Monday's protests came after a half-built German mosque called the "Süleymaniye Mosque" in the northwestern German town of Dormagen was vandalized with swastikas and racist graffiti associated with Nazism. The attack was one of several that various German mosques have suffered at the hands of far-right extremist groups.

The protests in the eastern German city and other parts of the country have received criticism from some business leaders who have been promoting the idea of bringing in more immigrants to Germany on the basis of the need for low-skilled labor. "We have long been a country of immigration and we must also remain so," said Ulrich Grillo, the chief of the German Federation of Industry (BDI), according to DPA.

Amid widespread anti-Islam protests in Germany, some brand new projects have been developed with the aim of actively supporting the immigrant community in Germany. The deputy president of the national working group PRO ASYL, Bernd Mesovic, said that many Germans also give significant support to protect immigrant's rights and to give voice to their concerns, according to Deutche Welle Turkey.

In the face of the growing number of refugees and asylum seekers seeking shelter in Germany and the threat posed by the radical militant group the Islamic State of Iraq and al-Sham (ISIS), the majority of Germans have been fueling anti-immigration sentiment while calling for more restrictive immigration policies.

Many Germans have criticized Chancellor Angela Merkel's government immigration policies, which have led to the growing number of refugees with different ethnic backgrounds coming to Germany. Germany recorded the highest number of asylum applications in 2013, 109,600 in total, and this number is expected to gradually increase due to the worsening humanitarian situation in Syria.

The number of refugees entering Germany may rise next year to 200,000, said the German Office for Migration and Refugees, DPA reported. In June 2014, Germany agreed to increase the number of Syrian refugees it hosts to an additional 10,000 under its humanitarian admission program. Germany has pledged to offer shelter to 20,000 humanitarian admissions with 8,500 individual sponsorships under the resettlement program.