Islamophobia on the rise in Germany 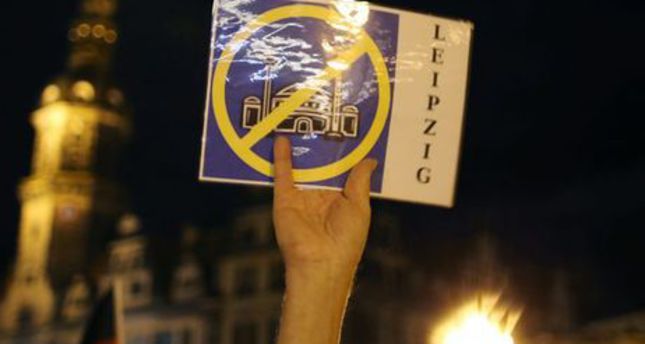 by AA Dec 25, 2014 12:00 am
Since 17,500 Germans stood in front of the Dresden City Opera House on Monday chanting, "No more lies. We are the people, "it has become clear that the far right is again on the rise in Germany. The group, Patriotic Europeans against the Islamization of the Occident (PEGIDA), has organized 10 such demonstrations, and latest was the largest so far.

The far right organization's leader, Lutz Bachmann, has built a considerable following since October when he started with a protest against building refugee centers in Dresden. On Monday he shouted to a cheering crowd: "This is not a land of immigration."

Demonstrations of this kind have spread throughout the country this year to the point that anti-extremist activists at the Berlin Against Nazis organization have created a smartphone app to track them, called "The Anti-Nazi app."

"The people who participate in these demonstrations do not consider themselves extremists, but rather ordinary middle class citizens," German psychologist Oliver Decker of the University of Leipzig said in an interview on Monday with the German business newspaper Wirtschaftswoche. "They see Islam as a danger and a target, as there is considerable fear of the country's immigration policies."

Decker is one of the authors of a study by his university released in June that actually shows far right extremist attitudes have declined across the country. "However, the downside is that certain groups of immigrants and migrants are more clearly discriminated against," Decker explained.

One of these groups is Muslim immigrants. "In recent years, Islamophobia as a modern form of xenophobia has become increasingly important as a field of action for the right-wing extremist scene," the German Office for the Protection of the Constitution said in a statement on its website. "Right-wing extremists try to arouse the population's fear of foreign domination."

Bachmann is a 41-year-old former advertising salesman. He told the German newspaper Bild-Zeitung that he is not against Islam itself, but rather the "Islamization" of his country. Nonetheless, there has been a 20.4 percent increase in attacks on foreigners in 2014, according to the German Interior Ministry's announcement on June 4.

There have been a number of counter-demonstrations spurred by anti-racism organizations like the one in Berlin. About 4,500 people marched through Dresden on Monday, carrying banners reading "Nazi-free."

Underlying this rise of the far right is a basic need, political scientist Albrecht von Lucke said. "These people feel that no one pays attention to them, that they are not heard," he said.