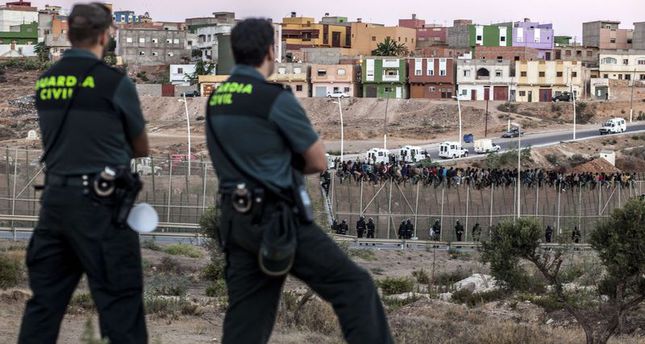 by Dec 29, 2014 12:00 am
Just across the sea from the sunny tourist beaches of southern Spain where many Europeans spend their Christmas holidays, a violent crisis is intensifying on Europe's borders with Africa.

Every week, hundreds of Africans try to scramble over the high fences that encircle Ceuta and Melilla, two Spanish-ruled enclaves on the northern tip of Morocco. Countless migrants and security officers are injured as the Moroccan military, on one side, and a few hundred Spanish police on the other, chase Africans seeking to cross.

Spain has ruled the two tiny territories - barely 12 square miles (30 square kilometers) of land between them - for hundreds of years, defying Morocco's claims to them. Spain insists it has the right to defend the territories and the 170,000 Spaniards living in them - notably against the threat of Islamic extremists crossing the border from Morocco. But it is feeling the strain of doing so.

Nearly 4,700 undocumented migrants have infiltrated Melilla thus far this year, the interior ministry said, an increase from 3,000 in 2013. "It is a situation of maximum pressure," said the Spanish government's delegate in Melilla, Abdelmalik El Barkani. "Melilla's immigration problem affects not only Spain and Morocco. It is a problem for the whole European Union."

Ceuta sits in a strategic spot 15 miles from Gibraltar across the mouth of the Mediterranean, with Melilla 140 miles to the east. To guard their fences, 600 Civil Guards are stationed in each of the territories. The Spanish government says nearly 20,000 migrants have tried to storm the six-meter (23-foot), triple layer fence at Melilla this year alone.

"You have to be strong and very fit. You have to be a lion!" said Abou Diarrisso, a lean 22-year-old from Ivory Coast who clambered over into Melilla. "There were 200 of us to start with. I was the only one to get over the fences," he added.

Videos filmed by Spain's Civil Guard police and non-government groups show what happens to the less fortunate climbers, as well to some of the officers who intercept them. Some migrants sit atop the fence for hours before falling off exhausted, getting dragged down by Spanish guards or knocked off by blows from their batons. Officers also fall, or trade blows with migrants. "We are totally overwhelmed," said one police source. "It is a tragedy" for the migrants, said another. "But it is a tragedy for us too," the source added.

A video filmed by rights group Prodein in October showed Spanish guards beating a migrant on the fence and carrying him apparently unconscious back to the Moroccan side.

The Spanish government has since announced a reform that would formally authorize border guards to drive migrants off who try to climb the fence. Commissioner Nils Muiznieks of the Council of Europe, the continent's top human rights authority, branded that plan "unjust and illegal under international law". Spain complains that it is guarding the 18 kilometers (11 miles) of borders around Ceuta and Melilla for the whole European Union.

"People in offices in northern Europe, where they do not have this problem, give us lessons in humanitarianism," said Spain's Interior Minister Jorge Fernandez Diaz. "Let them give me their address and we'll send these immigrants to them, if they promise to look after them and give them a job," Diaz added.

The new head of the European Commission, Jean-Claude Juncker, has called for EU countries to jointly spend more money on securing their borders. The annual budget of the bloc's border agency is currently about 90 million euros ($110 million). Spain blames human-trafficking networks that it says bring the migrants to its borders from poverty-stricken African countries and war zones in North Africa and the Middle East.

Spanish police say they have identified two main African people-trafficking routes towards Ceuta and Melilla, a security official who asked not to be named told AFP. One is a network of contacts guiding migrants who willingly make the journey up from western Africa. The other is a racket run by Nigerian drug gangs and pimps that make migrants pay off their debts to the traffickers by working after they get to Europe.

Once close to Ceuta and Melilla, the migrants have a range of dangerous ways to try and cross the borders or the Mediterranean, aided by local traffickers. Some pay up to 3,000 euros ($3,700) to traffickers who hide them in the bodywork of cars, the motors of boats and tankers of cement.

Immigrants arriving in Melilla have also reported suffering "brutal" attacks in Morocco on their way to the fence, said Manuel Soria, a local rights activist in Melilla. "This problem must not be hidden from the rest of Europe," he said.