Brazilian President Rousseff sworn in for second term in office 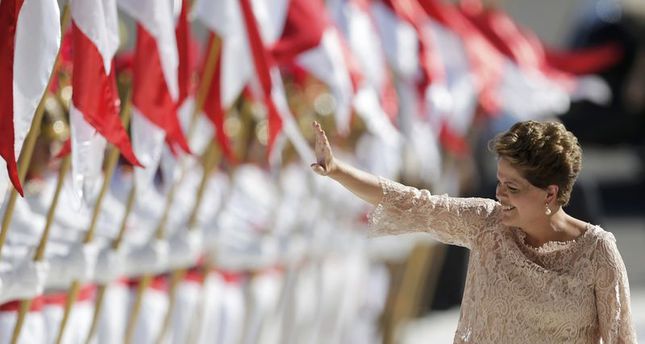 by AA Jan 01, 2015 12:00 am
Dilma Rousseff vowed to fight corruption, restore economic growth, and put education at the heart of sweeping reforms during an inauguration ceremony on Thursday.

In her 40-minute address, the president acknowledged widespread public dissatisfaction with her government, saying that Brazilians had "sent (her) a message demanding change" and vowing political reforms and nationwide action on corruption.

Rousseff said her second term in office would follow a simple motto. "Brazil: The Educator Nation," that would put improving schools and universities, as well as improved access to them, at the heart of her new government.

"Only education can free people and open doors to a prosperous future," she said.

She also promised to take "firm, sober" steps toward balancing the stability of the economy to boost growth, but said the path chosen would be of "minimum possible sacrifice" to workers and the poorest in society.

"I will dedicate all my efforts to taking Brazil into a historic new cycle of changes ... that will take us into a new phase of robust and sustainable growth," Rousseff said, noting that Brazil remained the world's "seventh largest economy."

The president also mentioned the corruption scandal that has brought state-run oil giant Petrobras to its knees in recent months, pledging to restore confidence in the company and put Brazil in the ranks of the world's top oil and gas exporters.

Improvements to Brazil's infrastructure would also be central to her new government, she said, while vowing to address the complicated tax system, help small businesses, and step up the country's fight on climate change and deforestation.

The 67-year-old president began her second consecutive four-year term, the maximum permissible under law, after winning an October runoff election by the narrowest margin seen in recent elections, taking 51.6 percent of valid votes, while her center-right opponent, Aécio Neves of the opposition PSDB party, received 48.36 percent.

Argentine President Cristina Fernandez de Kirchner, a key ally of the Brazilian leader, was forced to cancel her trip to Brazil after breaking her ankle.

Thursday also saw a raft of ministers and 26 governors take office, including a fourth term at the helm for São Paulo Governor Geraldo Alckmin, despite a looming water crisis in the country's most populous and prosperous state.

In terms of Rousseff's new ministerial line-up, much of the media attention has centered on new finance minister Joaquim Levy, who will be charged with kick starting the economy and whose nomination was broadly welcomed, including by the markets that regularly express their dissatisfaction with Rousseff's fiscal policies.

Analysts believe Brazil will end 2014 with a GDP growth of just 0.13 percent, and predict only 0.55 percent growth in 2015, according to Central Bank figures.

In 2010, the year before Rousseff took office, the economy expanded 7.5 percent, but has since achieved far slower growth.

With the official jobless rate in November standing at a record low of 4.8 percent, experts believe Rousseff is unlikely to back plans that risk significant changes to levels of unemployment.

Rousseff's re-election marks the fourth consecutive term for the center-left Workers' Party, the most since the country underwent redemocratization in the 1980s.

Previously, Luiz Inácio Lula da Silva was president for two terms between 2003 and 2010, and speculation is now growing over whether he will run for president in 2018.
Last Update: Jan 02, 2015 10:35 am
RELATED TOPICS