Another migrant ship abandoned by its crew in the Mediterranean 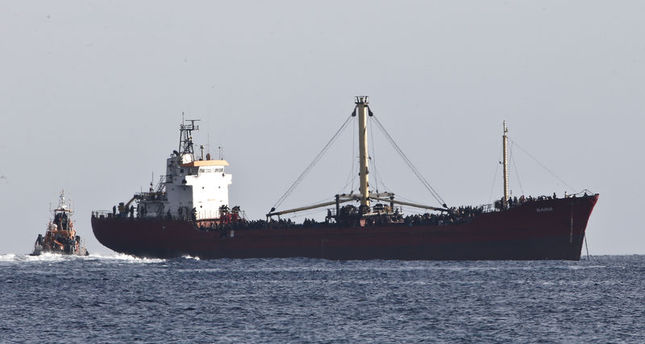 by Jan 02, 2015 12:00 am
A ship carrying hundreds of migrants has been abandoned by its crew in rough seas in the Mediterranean off Italy's south coast in the second such incident in three days, the Italian coastguard said on Friday.

Three coastguards managed to take control of the vessel, the Sierra Leone-flagged Ezadeen, after landing on it by helicopter, a statement said. They will take it to an Italian port.

The cargo ship had been drifting powerless in rough seas about 40 nautical miles from Italy's southern coast with as many as 450 people onboard.

"We know that it left from a Turkish port and was abandoned by its crew," coastguard spokesman Filippo Marini said in an interview with SkyTG24 television.

"When we hailed the ship to ask about its status, a migrant woman responded, saying, 'We are alone and we have no one to help us.'"

It had been put on a collision course for the Italian coast but ran out of fuel, he said.

The nationality of the migrants was not yet known, a coastguard spokesman said, but there are women and children on board.

In an earlier incident, about 900 migrants, mostly Syrian refugees, arrived in Italy on Wednesday after they were apparently abandoned by their ship's crew and set on a crash course for the Italian coast. The coastguard also boarded that vessel and took over navigation.