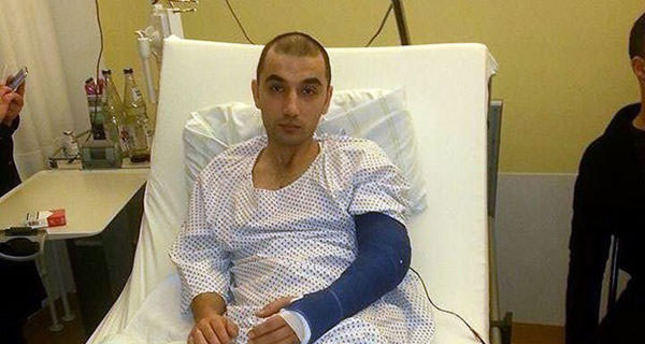 by Daily Sabah Jan 02, 2015 12:00 am
A Turkish business owner, Ibrahim Kural was stabbed in the arm by a group of far-right extremists during New Year's Eve in the southwestern German city of Pforzheim.

Karlsruhe Police Department told reporters that the incident was committed by two brothers, who were carrying knives and a gas pistol. The assailants were captured and released in the same night after interrogation and a third suspect in the incident escaped, police said.

Kural, the owner of Ala Turca Kebab House, said that the incident occurred when he and his family gathered at the restaurant to celebrate Christmas Eve and four assailants wanted to enter the restaurant even though it was closed.

After Kural refused to let them in, the assailants yelled racist slurs and demolished the restaurant's windows, stabbed the owner in the arm and ran away.

Kural was taken to a hospital after the assault and now is in good condition.

Germany witnesses an increase in suspicion and negative feelings towards Muslims and immigrants in recent months as far right and populist groups sought to benefit from a growing fear of Islam and Muslims.
Last Update: Jan 02, 2015 7:49 pm
RELATED TOPICS