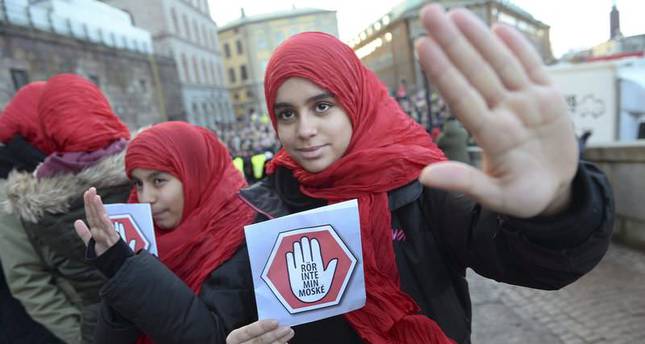 by AA Jan 02, 2015 12:00 am
Thousands of people across Sweden rallied on Friday against a series of arson attacks on mosques in the past week.

At least 3,200 people gathered in Sweden's three largest cities -- Stockholm, Gothenburg and Malmo -- on Friday against racism and Islamophobia.

Around 40 different groups organized the protests, including Sweden's Muslim Council and the Swedish United Nations Association.

They said in a statement on their Facebook page: "Swedish Muslims testify about how racism in general and Islamophobia in particular is growing stronger in Sweden. Hate crimes against individuals and assembly premises are occurring more often and we [believe] that religious freedom is under threat in Sweden."

The demonstrations come days after three mosques were attacked by arsonists in Eskilstuna, Eslov and Uppsala.

Sweden's Culture Minister Alice Bah Kuhnke, who attended the protest in Stockholm, said during a speech that she will meet representatives of various Muslim communities in February as part of a national strategy against Islamophobia in Sweden.

''Then the government will go from saying beautiful words to actually taking action,'' Kuhnke said.

Swedish police have increased security around mosques in Sweden after a mosque in the eastern city of Uppsala was set on fire on New Year's Eve, making it the third arson attack on a mosque in Sweden since Dec. 25 when a blaze was started at a mosque in the southeast town of Eskilstuna, injuring five people.

Swedish authorities have decided to increase dialogue with representatives of Muslim communities, to prioritize cooperation with the Security Service and to encourage district police forces to keep a particularly close eye on mosques, according to Dagens Nyheter.

Expo, a Swedish foundation raising awareness on racism and xenophobia, said at least 12 attacks had taken place on mosques across the country in 2014.

Swedish officials have condemned the attacks as "foul" and "an attack on religious freedom in the country."

The series of attacks occurred amid tense debate on immigration and the rise of the far-right party, the Sweden Democrats.