Muslims to march in protest of widespread racial hatred 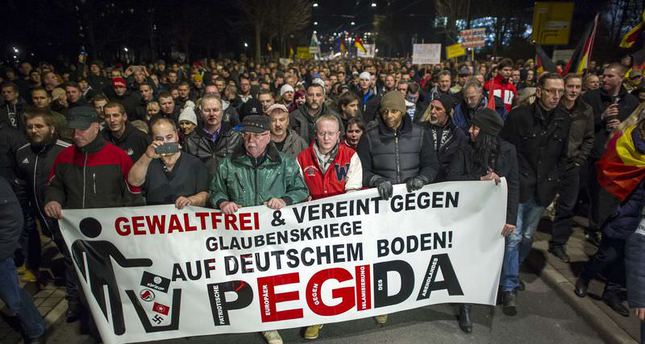 After the Jewish community, Muslims are now the target of neo-Nazi movements in Germany, a country that has long suffered from a history of xenophobia led by far-right extremists. Thousands now prepare to protest far-right extremism

In the face of massive anti-Islam protests organized by Patriotic Europeans against the Islamization of the West (PEGIDA), Germany will witness a major counter-demonstration on Jan. 5 to protest widespread hatred toward Muslims in German society, which has a long history of fear of foreigners, dating back to the Nazi regime's extermination of the Jewish community. Since then, neo-Nazi movements have led ongoing discriminatory practices and violent attacks against immigrants. At least 13 nongovernmental organizations of Muslim and ethnic Turkish immigrants in Germany released a joint declarations stating that they would give significant support to the upcoming demonstration against PEGIDA, while calling for other organizations to join the counter-protest in Cologne. "We are calling on all citizens to join the demonstration in Cologne on Jan. 5 and take a stance against racism, xenophobia, hatred against foreigners and hostility against Islam," the organizations said in a joint statement, as reported by Anadolu Agency. "We will support all democratic initiatives and allies that oppose PEGIDA and other groups inspired by it," the statement added.

The counter-protest has gained significant support from political parties, trade unions and church organizations while condemning such violent actions toward Muslim communities. "PEGIDA is made up of an astonishingly broad mix of people, ranging from those in the middle of society to racists and the extreme right-wing," Cologne Cathedral Dean Norbert Feldhoff told Reuters. "By switching off the floodlighting we want to make those on the march stop and think. It is a challenge: Consider who you are marching alongside," he said.

German Chancellor Angela Merkel also criticized the anti-Islam PEGIDA movement in a New Year's speech, saying, "Do not follow people who organize [anti-Islam protests], for their hearts are cold and often full of prejudice and even hate," stressing that such protests promote racial hatred and discrimination against people in Germany and trigger social unrest.

A right-wing populist movement, PEGIDA has drawn attention lately as it has drawn large support from far-right groups and ordinary citizens. Far-right anti-Muslim groups have become more prominent in Germany. A weekly march in the eastern city of Dresden has attracted many Germans, and more than 15,000 people take to the streets in Dresden every Monday to protest the rising number of immigrants. The protesters gather for weekly rallies in front of the Dresden City Opera House, chanting: "No more lies. We are the people."

Since October 2014, Germany has witnessed several anti-Islam demonstrations and racially motivated attacks organized by far-right extremist groups. A German mosque in the northwestern German town of Dormagen was painted with swastikas and racist graffiti associated to Nazis. The mosque attacks evidently indicate that Muslim's lives have been threatened considering this latest act of vandalism.

Considering the rightward shift in Germany, anti-Islam rallies have also spread across Germany. With many Germans supporting anti-Muslim rhetoric and anti-immigration policies, according to a poll, more people have started to consider Islam a threat to their society. The latest opinion poll conducted by Forsa for Germany's Stern magazine suggests that one in eight German would join anti-Muslim demonstrations while highlighting growing support for far-right parties and movements. Nearly 30 percent of Germans polled believe that anti-Islam demonstrations organized by the recently formed far-right movement PEGIDA are "justifiable."

Mainstream parties have been accused of being too soft on immigration policies, as Germany and other European countries expect more refugees seeking shelter. This has led to growing concern among German society about the burgeoning number of immigrants, many from Syria, pouring into the country. In the face of the growing number of refugees and asylum seekers looking for shelter in Germany and the threat posed by the radical militant group the Islamic State of Iraq and al-Sham (ISIS), many Germans have been fueling anti-immigration sentiments.