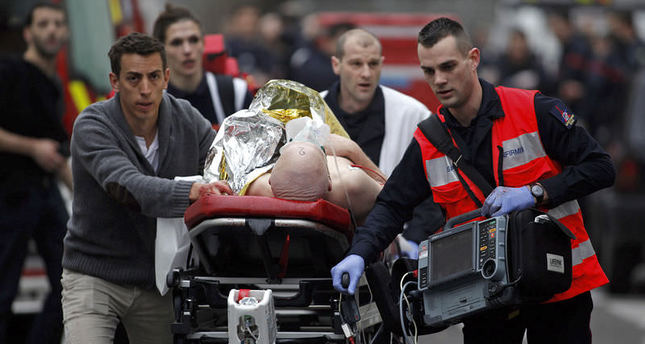 by Daily Sabah with Agencies Jan 07, 2015 12:00 am
Twelve people were killed and twenty wounded -- four remain in a critical condition -- in a shooting at the Paris offices of French satirical magazine Charlie Hebdo on Wednesday.

Editor-in-chief Stephane Charbonnier, known as Charb, and the cartoonists known as Cabu, Tignous and Wolinski were killed in the attack.

Two policemen were among the dead, having been killed during the exchange of gunshots in the street outside the office while the attackers were trying to escape.

According to French local media, one of the two officers killed in Wednesday's attack has been identified as 42-year-old Muslim policeman Ahmed Merabet, who was an area patrolmen for the 11th arrondissement.

According to videos, photos and eyewitness reports on social media and media outlets, two assailants carrying AK-47's carried out the attack.

French security forces are also on alert against further attacks as well as retaliations against the country's five million Muslim community.

Terrorists managed to escape in the black vehicle, which they used to carry out the attack, wounding several pedestrians. A large scale manhunt is in effect throughout France to find the assailants.

The magazine was reportedly having its weekly editorial meeting at the time of the attack, which increases the suspicions for a well-planned attack.

French President François Hollande arrived at the scene of the shooting soon after the attack, and is expected to hold an emergency government meeting. Hollande confirmed the number of casualties at the scene.

The French President said that the attack is against press freedom and called for national unity, further indicating: "We should not relate this attack to Muslims, as there could be provocateurs."

The country raised its alert status for Paris to the highest level following the incident, according to the officials.

Charlie Hebdo had issued satirical caricatures of Prophet Muhammad and Muslim leaders in 2006 and 2012, which the magazine presented as "freedom" while it sparked anger in the Muslim world.

In February, 2006, it ran a front page with the headline "Mohammad overwhelmed by fundamentalists" picturing a tearful Prophet Mohammad saying: "It's hard being loved by jerks."

The magazine was firebombed in 2011, with no casualties.

Another cartoon of the Prophet Muhammad, published in 2012 by Charlie Hebdo, also led to the temporary closure of French embassies and schools in more than 20 countries due to security.
The latest tweet shared from the magazine's Twitter account, roughly before two hours from the attack, was a cartoon of the self-proclaimed Islamic State of Iraq and Sham (ISIS)'s leader, Abu Bakr al-Baghdadi, showing him saying: "Health above all."

The health emphasis of the cartoon might be linked to the latest strike of the doctors in France over health reforms, according to various sources.
Last Update: Jan 08, 2015 8:28 am
RELATED TOPICS