France to make a choice between NATO and Russia 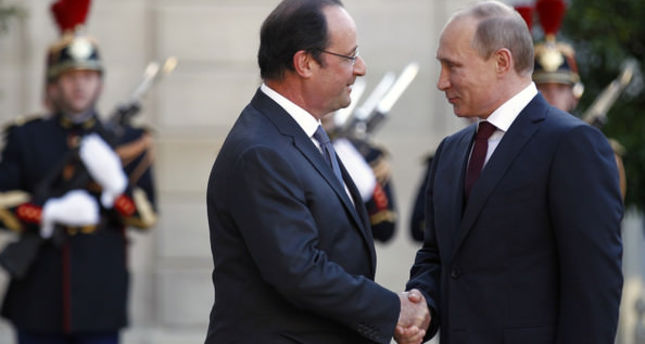 France faces a tough decision to either deliver two Mistral ships to Russia and face the anger of its NATO allies, or to terminate the Mistral deal, paying a heavy price and further deteriorating its economy

French President François Hollande on Monday called for sanctions on Russia to be lifted, a move considered to be connected with mending relations with Russia due to the unsettled dispute over the delivery of two Mistral ships for the Russian navy. Amid tough Western sanctions on Russia, the French President's soft tone suggests he will look to resolve the Mistral dispute, a move that could be costly for France.

"[Russian President Vladimir] Putin does not want to annex eastern Ukraine. He has told me that…What he wants is to remain influential. What he wants is for Ukraine not to fall into the NATO camp… What we want is that he respects the territorial integrity of Ukraine. What we want is that he does not support the separatists," said the French president.

France would prefer to remain tight with both sides; the European Union and its NATO allies on one side and its military cooperation with Russia, which is worth 1.2 billion euros, on the other. The West's tough measures on Russia were seen as a direct challenge to France cooperating with Russia militarily, which would have inevitably had a huge impact on the French economy. It would appear evident that the deteriorating bilateral relations with Russia could be costly for France.

Amid pressure from the European Union on France, who say that the delivery of a Russian warship could be used to threaten its neighbors, France faces a huge bill for halting the Mistral deal with Russia. One of the two Mistral-class ships, named the Vladivostok, was to be handed over in mid-November to Russia. However, France decided to delay the delivery of the first warship due to concerns over Moscow's role in the crisis in eastern Ukraine. The second ship, the Sevastopol, is due for delivery late this year. No progress has been made so far over the Mistral dispute between France and Russia.

The 1.12 billion euro contract for building two Mistral-type ships was signed by the Russian defense exporting company Rosoboronexport and DCNS, a French industrial group specializing in naval defense and energy, in June 2014. The 21,300-ton Mistral-class ship can carry up to 16 helicopters, four landing crafts, 13 tanks and over 400 soldiers.

While waiting for France's decision over the long-standing discussion, Russia urged France to fulfill a contract to deliver two Mistral helicopter carriers or return Moscow's money. With the Russian ruble suffering from a currency crisis, the Russian deputy defense minister Antanoly Antonov stated that Russia would "gladly take back the money" it paid to France, according to Russian state-run news agency Itar-Tass. However, if France chooses to pay the price for the deal with possibly heavy fines, it would hurt its already-damaged economy. France will likely not take the risk of facing heavy consequences of terminating the Mistral deal. But the delivery of the two giant warships to Russia would result in facing the wrath of EU and NATO, which accuses Russia of violating international law in Ukraine through backing and financing separatist groups in eastern Ukraine.

The European Union has imposed a package of significant restrictive measures on Russia including "limiting access to EU capital markets for Russian state-owned financial institutions, imposing an embargo on trade in arms, establishing an export ban for dual use goods for military end users, and curtailing Russian access to sensitive technologies particularly in the field of the oil sector." In addition to freezing assets and travel bans, Tier Three sanctions, hard-hitting sanctions aiming to hit Russian gas and oil and to impose arms embargo to Russia, has been on the EU agenda.

Despite the West's joint decision on Russia sanctions, many western countries would likely be divided over tightened sanctions, due to the fear of damaging their own economies. Some of them, like Germany and Italy, are heavily reliant on Russian gas. Therefore, it is not only France but many EU countries are irresolute in taking precautionary measures when it comes to sanctions imposed on Russia.