700,000 people rally in France in response to recent attacks: minister 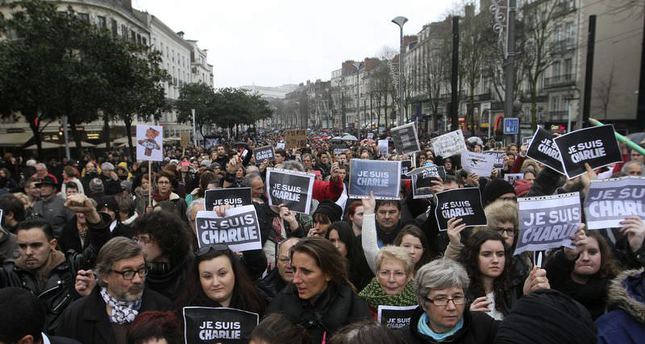 by Jan 10, 2015 12:00 am
Around 700,000 people have poured out onto the streets of France on Saturday to pay tribute to the 17 people killed during three days of terror, the interior minister said.

"700,000 people have marched" in cities around France, Bernard Cazeneuve told reporters on the eve of a rally in Paris he said would likely attract "several hundred thousand" people, as well as a string of world leaders.

Security forces guarded places of worship and tourist sites, and prepared for what's likely to be a huge silent march Sunday to show unity against extremists. Two dozen world leaders, including German Chancellor Angela Merkel and British Prime Minister David Cameron, are among the many expected to join.

French Interior Minister Bernard Cazeneuve said authorities will do everything to ensure security at the event. Speaking after an emergency meeting called by French President Francois Hollande on Saturday morning, Cazeneuve called for "extreme vigilance," saying that "given the context, we are exposed to risks."

Cazeneuve said the government is maintaining its terror alert system at the highest level in the Paris region, and said investigators are focusing on determining whether the attackers were part of a larger extremist network.

They were cornered on Friday at a printing house in Dammartin-en-Goele near Charles de Gaulle Airport on Friday, prompting a daylong standoff with police.

On Thursday, another attacker Amedy Coulibaly shot a policewoman to death south of Paris. The next day, he attacked the Paris kosher market, threatening more violence unless the police let the Kouachis go.

It all ended at dusk Friday with near-simultaneous raids at the printing plant and the kosher market in eastern Paris.

Witnesses and family members of survivors struggled Saturday to come to terms with what happened.