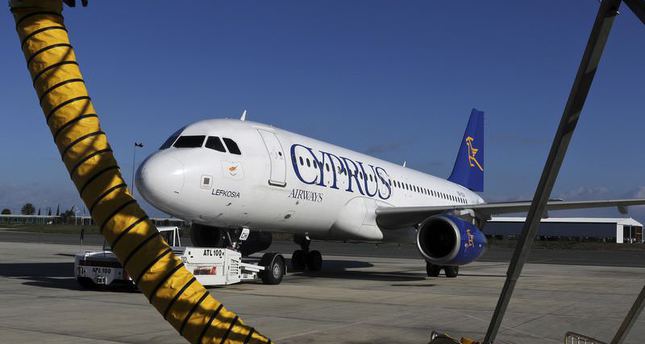 by Jan 10, 2015 12:00 am
Southern Cyprus' national airline lost its operating license and stopped all flights after the European Union ruled that it had illegally received tens of millions of euros in state aid, officials said Friday.

Finance Minister Harris Georgiades and Communications Minister Marios Demetriades said that an administrator will now be tasked with winding down Cyprus Airways. The country's air transport licensing authority said it revoked the airline's license because it could not ensure flight safety as a result of its financial troubles.

The European Commission ruled that money-losing Cyprus Airways, which is nearly 94 percent government-owned, must pay back over 65 million euros ($76.78 million) out of a 103 million euro ($121.67 million) state aid package it received in 2012-13 that gave it an unfair advantage over competitors.

The ministers said the government will cover the estimated cost of 6-7 million euros of Cyprus Airways ticket holders who either wish to be reimbursed or make alternative travel arrangements.

Demetriades said some 70 airlines fly to Cyprus, which received a multibillion euro international rescue nearly two years ago, and that the demise of the national carrier whose market share dwindled to a mere 10 percent won't diminish the east Mediterranean island's air links abroad.

He said plans are under way to set up a new company with private backing that will bear the Cyprus Airways name and logo.

Several dozen airline staff milled outside the company's Nicosia offices awaiting word of what will happen to them as Georgiades said they will receive salaries and pension benefits that they're entitled to.

Georgiades said the airline's financial troubles were so severe that potential investors couldn't be wooed. Early investment feelers sent out by companies including Ireland's Ryanair and Greece's Aegean went nowhere.

The company, founded in 1947, struggled due to years of graft and mismanagement, and hemorrhaged money as it could no longer compete with new low-cost airlines that grabbed huge chunks of its business.

Authorities tried to salvage the bloated airline through several restructuring plans that halved staff to around 500 people and shrunk the fleet to six planes. But the last straw came by way of the European Commission's ruling.