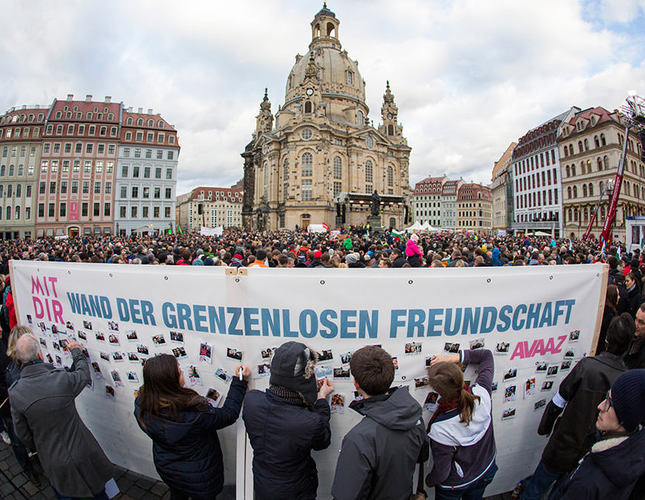 by Anadolu Agency Jan 11, 2015 12:00 am
Thousands of immigrants and Germans took to the streets Saturday to protest against a right-wing populist group and its copycat anti-Islam movements in Germany after the call of CDU's Saxony PM Stanislaw Tillich and Dresden Mayor Helma Orosz.

Around 35,000 protesters attended a rally in the eastern city of Dresden to protest against the Patriotic Europeans Against the Islamization of the West, or PEGIDA.

On Monday, more than 18,000 protesters attended PEGIDA's rally in Dresden, marking the largest anti-Islam demonstration by the group.
The demonstration started with a silent homage for the people who were killed after the deadly attacks in Paris.

The anti-Pegida demonstrators held banners that said: "My friend is a Muslim," "Dresden opened to the world," and "against racism."

The mayor Orosz said during the anti-PEGIDA protest, "We will not be split though hatred."

Pointing that the PEGIDA demonstrations cause worldwide anxiety, PM Tillich said, "We are freedom-loving and democratic, open-minded, tolerant, caring and solidary."

"You cannot objectively speak with the people, who are polarized against the foreigners and have phobia against foreigners and immigrants and asylum seekers," he added.

PEGIDA is expected to gather more than 18,000 people this Monday in the aftermath of a deadly attack in Paris on a French satirical magazine that killed 17 people.

The rise of the high-profile right wing group, PEGIDA, has recently made headlines in Germany and abroad. The group started weekly protests in Dresden in October with around 500 protesters, but significantly increased its support base within three months.

PEGIDA has inspired several copycat groups in other major German cities, like KOEGIDA in Cologne, HAGIDA in Hamburg and BAERGIDA in Berlin.

Germany witnessed an increase in suspicion and negative feelings towards Muslims in recent months as far right and right wing populist parties sought to benefit from a growing fear of Islam and Muslims, largely influenced by reports of atrocities committed by the militant self-proclaimed Islamic State of Iraq and al-Sham (ISIS) group in the Middle East.

According to the poll conducted for Stern by the Forsa Institute and published online Thursday, 29 percent of Germans said that Islam was such a big influence on the daily lives of Germans that the recent anti-Islam demonstrations such as the ones organized by PEGIDA were justifiable.

A total of 13 percent of those polled also expressed a willingness to join the protests if they were organized in their cities.