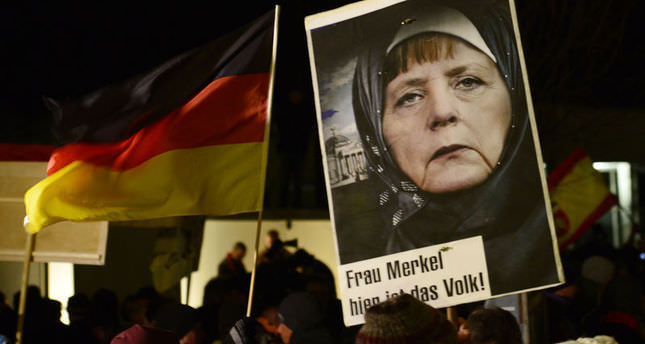 by Associated Press Jan 13, 2015 12:00 am
A weekly anti-Islam rally in the eastern German city of Dresden drew its biggest crowd yet on Monday, after organizers declared it a tribute to the victims of the terror attacks in Paris.

Organizers said 40,000 people participated in the march, while Dresden police put the figure at over 25,000 people - still considerably more than the 18,000 who came last week.

The group, which calls itself Patriotic Europeans against the Islamization of the West, or PEGIDA, had asked supporters to wear black ribbons as a show of respect for the 17 people killed in the French capital last week.

"The terrible acts of Paris are further proof that PEGIDA is needed," said Lutz Bachmann, one of the organizers of the Dresden rally.

PEGIDA's critics, including all of Germany's mainstream parties, have accused the group of exploiting the attack to stir up race hatred.

Some marchers held up placards with the names of the French journalists killed in Paris. Others carried banners condemning the "lying press" that they claimed misrepresents their cause. One poster showed Chancellor Angela Merkel wearing an Islamic headscarf.

One marcher, Markus Bauer of Bautzen, said he had come to express his disgust about what he called the "ruling class."

"Wall Street controls them all. They are responsible for all the wars and people know that," he said.

PEGIDA's organizers insist that they aren't aligned with Germany's far right, but many in the crowd sported insignia and clothing that neo-Nazis use to identify each other.

In other cities across Germany, counter protesters outnumbered the anti-Islam demonstrators.

Berlin police said 4,000 people demonstrated against an anti-Islam rally numbering about 400 protesters. In Munich 20,000 people took to the streets to support tolerance and only 1,500 anti-Islam protesters showed up.

Leipzig police estimated that 15,000 counter protesters had rallied against a far smaller number of anti-Islam demonstrators.