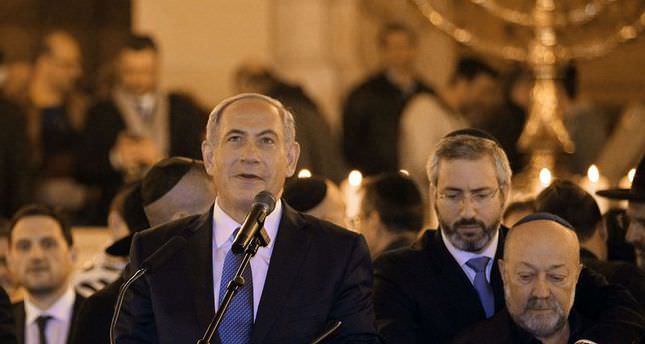 Prime Minister Benjamin Netanyahu invited French Jews to migrate to Israel in Paris Grande Synagogue on Sunday. The crowds in the synagogue responded to his invitation by singing the French national anthem.

Netanyahu said, " I want to say to you what I say to all our Jewish brothers, that you have a full right to live secure and peaceful lives with equal rights wherever you desire, including here in France."

Then he added, "these days we are blessed with another privilege, a privilege that didn't exist for generations of Jews – the privilege to join their brothers and sisters in their historic homeland of Israel."

Rabbi Menachem Margolin, the head of the European Jewish Association, was particularly stern after Netanyahu's invitation, saying Aliyah - the process of Jews migrating to Israel - was not the answer to everything, even if it was an important policy for the state of Israel.

"Anyone familiar with the European reality knows that a call to Aliyah is not the solution for anti-Semitic terror," he said.

Faced with an upsurge in anti-Semitic attacks and threats, some 7,000 French Jews out of the 550,000-strong community immigrated to Israel last year, according to Israel's quasi-governmental Jewish Agency.

Helping more of the Jewish diaspora migrate to Israel remains a central policy of the right-wing government, which faces elections in March. But many still don't want to leave France and even those considering it worry about the difficulties of starting a new life in a foreign country.

"I live in France and I want to die in France," said Mauricette Abouchaya, a middle-aged Parisian woman who was cheering Netanyahu as he visited the site of the kosher grocery attack.

"Israel has a very different culture and language," said a 38-year-old financial analyst who gave his name as Sami.

Netanyahu's "move to Israel" rhetoric was no different to what he frequently says on the topic. But coming on the day of a three-million-person march designed to show the world standing as one with France, it came across as divisive.