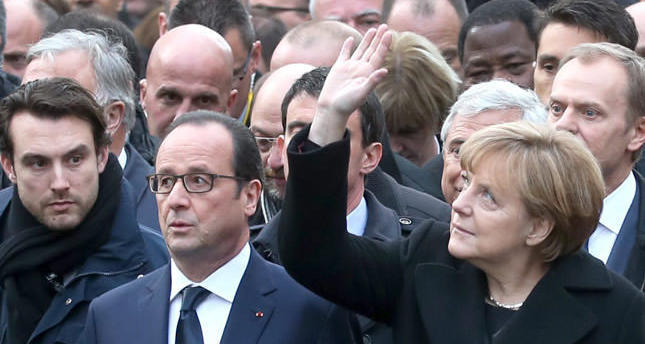 In response to the Charlie Hebdo massacre, European countries have vowed to heighten security measures to both restore security and order and to counter the permanent threat posed by home-grown militants

European countries have taken action to restore order and security across the continent and strengthen border security control as well as share better international intelligence data to follow European youths who have been radicalized and recruited by the Islamic State and al-Sham (ISIS) militants.

Regarding the menace of anti-Semitism and the radicalized youth throughout Europe, German Chancellor Angela Merkel emphasized the necessity to fight against terrorism with unity. "Hate preachers, violent delinquents who act in the name of Islam, those behind them, and the intellectual arsonists of international terrorism will be rigorously fought with all legal means at the disposal of the state," German Chancellor said.

Nearly half of the 10,000 troops that were drafted have been deployed to guard Jewish schools in order to keep them safe from possible militant attacks. After four French Jews were killed in Paris by a gunman at a kosher supermarket, France has tightened security measures across the country via the deployment of up to 30,000 extra police and soldiers to provide order and security.

The large number of homegrown terrorists is an indication that European countries have to take significant security measures to stop the flow of militants who are looking to return to their homelands or want to travel abroad to fight alongside ISIS militants. Therefore, counter-terrorism measures are now to be reassessed as more European countries strictly oppose opening borders, and the liberal tolerance championed by the European Union itself.

The Charlie Hebdo massacre has shown that the most serious terrorist threat Europe faces does not comes from the Middle East or West Africa but EU nationals who support ISIS or al-Qaida-linked militants. While reassessing the terrorist threat to Europe, it has been acknowledged that homegrown militants have become the major threat for European countries. The security threat posed by ISIS-linked homegrown militants has recently drawn much more attention in Europe. Europe's police organization Europol underscored that roughly 5,000 radicalized European fighters in Syria will continue to pose a greater risk to European countries as they become more hostile to the West. The two perpetrators of last week's Charlie Hebdo attack, the Kouachi brothers, are also homegrown militants who made connections with al-Qaida on the Arabian Peninsula (AQAP). They were French nationals who grew up in France. A large number of French men have looked to travel to Iraq and Syria to fight alongside radical Islamic State and al-Sham (ISIS) militants. "There are 1,400 individuals who are involved in departures for jihad, for terrorism, in Syria and in Iraq," French Prime Minister Valls said Monday, according to AFP. German police stated that around 550 people from Germany have traveled to the war zone in Syria and Iraq, DPA reported.