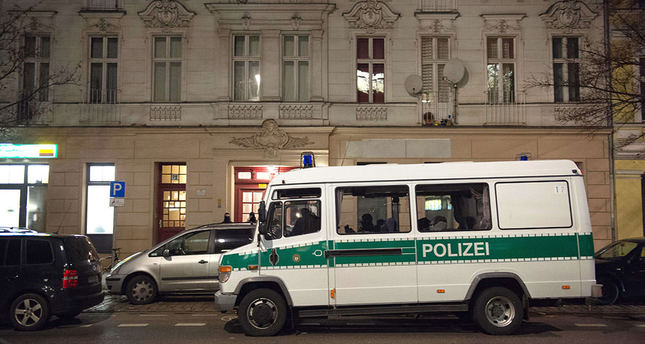 by Anadolu Agency Jan 16, 2015 12:00 am
German police have arrested two Turkish men suspected of supporting "terror networks" in Syria in a large operation against alleged radicals in Berlin.

About 250 police officers, including SWAT units, took part in the sweep in the German capital early on Friday morning.

They raided 11 properties, targeting a suspected Salafist network said to be close to the self-proclaimed Islamic State of Iraq and al-Sham (ISIS), police said.

Berlin police spokesman Stefan Redlich told local media: "Those arrested are suspected of radicalizing and recruiting people to join the war in Syria, and organizing their travel to this country.

"They are also suspected of providing night-vision goggles and also money for the terrorist groups in Syria."

He said that there were no indications that the group planned an attack in Germany and investigations were continuing.

A 41-year-old Turkish citizen referred to as "Ismet D." was arrested on suspicion of leading the suspected group, which allegedly consisted of extremist Chechens and Dagestanis, according to police.

Another Turkish citizen, 43-year-old "Emin F.", was arrested on suspicion of providing funds for the group.

Three other Turkish citizens held in the raids were released.

The German government banned all activities in the country conducted on behalf of ISIS, including propaganda, logistical or financial support, in September last year following reports of violent murders and atrocities committed by the group in Syria and Iraq.

German security organizations estimate that about 550 Germans, mostly young immigrants from Salafist groups, have traveled to Syria and joined ISIS since the beginning of the civil war.

About 6,000 Salafists are active in Germany, according to the Interior Ministry - a number which accounts for a very small minority of the Muslim population.

Germany has the second-largest Muslim population in Western Europe, after France. Among the four million Muslims in the country, three million are of Turkish origin.

Germany's leading Muslim organizations say the source of the radicalization of some young immigrants is not Islam itself, but sociological problems they face, such as discrimination, unemployment or a lack of future prospects.