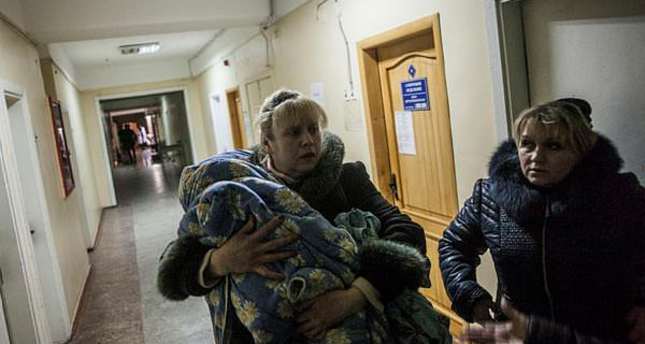 Sporadic shelling hit a hospital in Donetsk and shook other parts of the region on Monday while Ukraine alleged that hundreds of Russian troops crossed the border to help rebels fighting for control of the country's east.

Ukraine's fresh charges of Russia backing the rebels comes after each side blamed the other for a complete breakdown of a September truce in recent days, with heavy combat having rocked the area around Donetsk airport.

Despite the sporadic explosions on Monday, the overall violence was far less than in previous days, when heavy clashes rocked the area around the airport northwest of the city after Ukraine launched a major counter-offensive to push back the rebels.

The hospital hit on Monday is located in the centre of the city, and rebel officials who control the area reported six wounded including one doctor and five patients. The building's front was damaged and windows were blown out.

A university across from the hospital was also hit.

"I walked out of a store and took two steps, then I heard 'boom! boom! boom!'" said 35-year-old Denis Rybkine. "By reflex, I lay down on the ground, and I saw red bricks (from the hospital) fly and windows explode."

"Shells fell on the window," she said. "Miraculously, the students had left the room 15 minutes before. Can you imagine what would have happened if they were still inside?"

Elsewhere, in Debaltseve some 60 kilometres (around 40 miles) north of Donetsk, artillery fire killed three people on Monday and wounded 12.


Ukraine's military reported at least three soldiers killed over the last 24 hours and another 66 wounded, but claimed to be in control of the airport.

"We are not giving them the airport," said military spokesman Andriy Lysenko. "It is under our control."

Rebels have disputed Kiev's account and there was no independent confirmation, with journalists unable to approach the site.

The blackened and wrecked airport has been hit by repeated on-off clashes, and control has often been divided between a new and old terminal and other installations.

An army spokesman told AFP that the counter-offensive had accomplished its goal.

"Our soldiers had a concise task: Push back the rebels who were attacking us. The 93rd airport brigade accomplished it. The separatists can no longer fire on our positions at close range."

With rebels at one point claiming to control the airport, Ukraine launched a massive counter-offensive with tanks and other heavy artillery on Saturday that continued into Sunday.

Intense clashes followed, with repeated heavy explosions ringing out from the area surrounding the airport, while some were also heard closer to the city centre.

A recent upsurge in violence in eastern Ukraine has been centred around Donetsk airport and has left in tatters an often violated September truce, which was followed by another accord in December.

Kiev and Moscow traded blame for the breakdown of the ceasefire as the airport battle raged, while UN Secretary General Ban Ki-moon voiced alarm and called for an immediate end to the violence.

Ukraine and Western nations say Russia has supported the rebels with troops and weapons, charges Moscow strongly denies despite witness claims to the contrary.

Kiev issued further accusations on Monday, saying some 700 Russian troops had crossed the border into rebel-held territory earlier in the day.

Russia is under heavy sanctions from the West over its alleged actions in Ukraine, and the UN Security Council is due to discuss the worsening crisis at a meeting on Wednesday.

The conflict has killed more than 4,800 people since April last year and has become Europe's worst humanitarian crisis since the Balkan wars of the 1990s.

Thousands of people held a common prayer and peace march on Sunday in the capital Kiev attended by President Petro Poroshenko, who vowed the country would not yield to rebels he says have been backed by Russian troops and weapons.