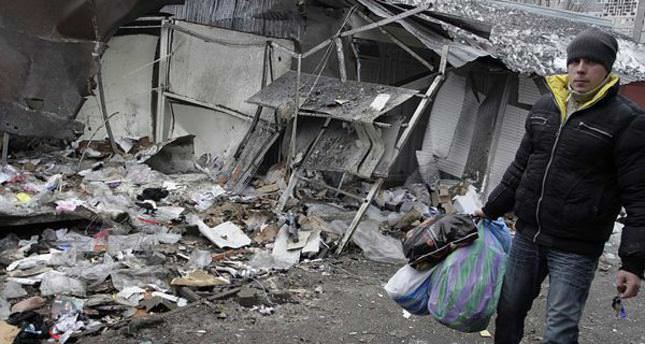 by Daily Sabah Jan 20, 2015 12:00 am
Open fighting has resumed in eastern Ukraine as the Ukrainian military launched a massive counter-offensive with tanks and other heavy artillery to regain control of rebel-held areas. Ukraine President Petro Poroshenko vowed to reassert government control over eastern regions to maintain the territorial integrity of the country. Ukrainian government forces claimed victory over the rebel-held Donetsk airport, a charge that rebel groups categorically deny.

"The Ukrainian army has suffered tremendous losses. More than six infantry and armor attacks were launched on the terminal building. All of them failed. Also, the Ukrainian military was defeated in their attempt to battle through to Donetsk," the head of the self-proclaimed Donetsk People's Republic (DPR), Alexander Zakharchenko, said, as reported by the Russian state-run Itar Tass news agency.

A U.N. statement released on Sunday right after the intense fighting resumed in rebel-held areas over the weekend said: "The secretary-general stresses that further deterioration of a situation that has led to heavy loss of life and civilian suffering must be avoided at all costs."

The Moscow-backed separatist conflict in eastern Ukraine has not been settled despite some attempts to put an end to violent clashes between Ukrainian government forces and the Russian-backed separatist. However, no peaceful, permanent resolution has been agreed upon and all mediating attempts have failed. Truce talks could not produce a breakthrough on issues relating to the settlement of the crisis in Ukraine. The volatile cease-fire that was agreed to in the Minsk Protocol of Sept. 5 and the Minsk Memorandum of Sept. 19 have been reportedly violated many times.

The nearly year-long conflict in eastern Ukraine has come at the cost of an increasingly high death toll with a large increase in the numbers of internally displace people. Almost 5,000 people have reportedly been killed during heavy clashes in rebel-held areas, according to U.N. figures. "More than 630,000 Ukrainians have been displaced internally and some 590,000 people have fled to neighboring countries. In addition, more than 5 million people are living within the conflict zone," the Norwegian Refugee Council reported, revealing the worst humanitarian crisis in Europe. The major humanitarian crisis has hit the country since the crisis erupted in February 2014. Following pro-Russian rebels self-proclaiming the existence of the Donetsk People's Republic in April, instability has prevailed in eastern Ukraine. After declaring their independence, clashes have increased throughout the region as government forces have stepped up their operations.