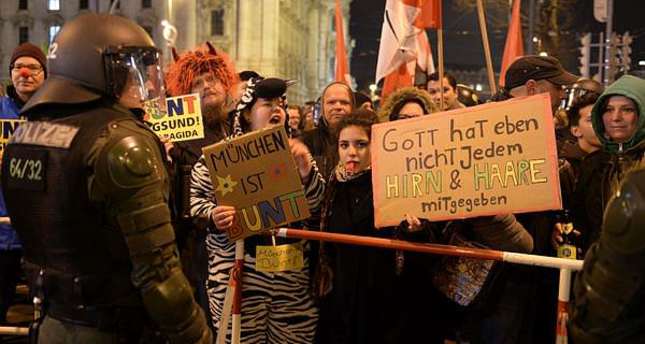 by Daily Sabah Jan 20, 2015 12:00 am
In the face of massive anti-Islam protests, Germany witnessed a major counter-demonstration on Monday to protest the widespread hatred toward Muslims in German society. More than 17,000 anti-racism demonstrators gathered in several German cities to promote tolerance and peace in society. During the protests, the far-right populist movement the Patriotic Europeans against the Islamization of the West (PEGIDA) was condemned for promoting racial hatred and discrimination of German Muslims in the county, thereby triggering social unrest.

While anti-PEGIDA groups took to the streets on Monday, the cancellation of PEGIDA's weekly rallies by German police citing a terror threat led to growing anger among PEGIDA supporters, as they vowed to continue more anti-Islam rallies next week in the eastern city of Dresden despite the police ban. The Dresden-based far-right PEGIDA group has gained attention recently while drawing support from other far-right groups and ordinary citizens as far-right anti-Muslim groups have become more prominent in Germany.

Since October 2014 Germany has witnessed several anti-Islam demonstrations and racially-motivated attacks organized by far-right extremist groups. Since then, there have been weekly anti-Islamic rallies organized by far-right populist groups in various German cities. The weekly marches started with nearly 500 demonstrators protesting the rising number of immigrants. However, the marches have grown much larger, with support growing from disenchanted Germans who oppose the "Islamization" of their country.

The anti-Islam PEGIDA movement has spread across Europe in the wake of the Charlie Hebdo massacre and kosher supermarket killings, in which 17 people were killed. The German far-right populist movement has gained more ground in other major European countries.

Anti-Islamic demonstrations modeled on the recent PEGIDA protests have spread to small countries like Denmark as the presence of a significant number of Muslims will likely fuel further tensions in these countries. The Danish branch of Germany's anti-Islamic PEGIDA movement staged its first rally on Monday with some 200 supporters in the capital city Copenhagen.

Meanwhile, an anti-terrorism investigation in Germany has been continuing as police raided 13 homes in three cities on Tuesday. Those who were targeted on Tuesday were not treated as suspects, but their computer hard drives were taken as part of the investigation into any possible link with militant groups in the Middle East. Two men suspected of recruiting fighters and supplying cash to the Islamic State of Iraq and al-Sham (ISIS) were arrested in Germany last Friday.

Ever since the rise of ISIS, Germany and other European countries have been suffering from becoming ISIS-recruiting hubs. The number of Germans who have fought for ISIS in Syria and Iraq has led to growing concern over the radicalization and recruitment of many young people through ISIS-linked organizations. It is estimated that around 550 people from Germany have traveled to the war zones in Syria and Iraq.