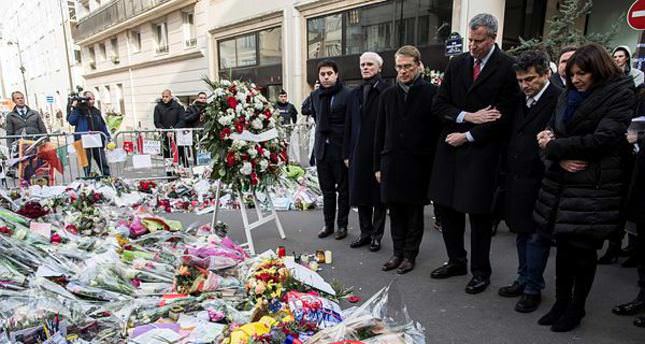 by Daily Sabah with AFP Jan 20, 2015 12:00 am
The mayor of Paris Anne Hidalgo is planning to sue Fox News for its reports that there were "no-go zones" in the French capital that police and non-Muslims avoid.
Speaking with CNN's Christiane Amanpour, Hidalgo said on Tuesday, "The image of Paris has been prejudiced, and the honor of Paris has been prejudiced" by the reports.
Answering a question on which network she planned to sue, the mayor said, "Fox News, that's the name."

The reports in the wake of the extremist attacks in Paris two weeks ago have been widely derided and prompted Fox to issue an on-air apology for suggesting parts of Paris and the English city of Birmingham were run under Islamic Shariah law.

"A complaint will be filed in the coming days," despite the apology, said a source at Paris city hall.

The news channel broadcast a map outlining the so-called no-go zones, which an expert, Nolan Peterson said felt like Afghanistan or Iraq.

On Saturday a Fox news anchor apologised for "some regrettable errors on air regarding the Muslim population in Europe, particularly with regard to England and France.

"Now this applies especially to discussions of so-called no-go zones, areas where non-Muslims allegedly are not allowed in and police supposedly won't go," the anchor said.

"Oh my God it's an Islamist, he has a beard," one of the jittery reporters cries as a taxi pulls up.

Another takes fright at the sight of a Moroccan restaurant: "Oh my God a couscous! Very dangerous couscous in Paris!"
Last Update: Jan 21, 2015 11:11 am
RELATED TOPICS