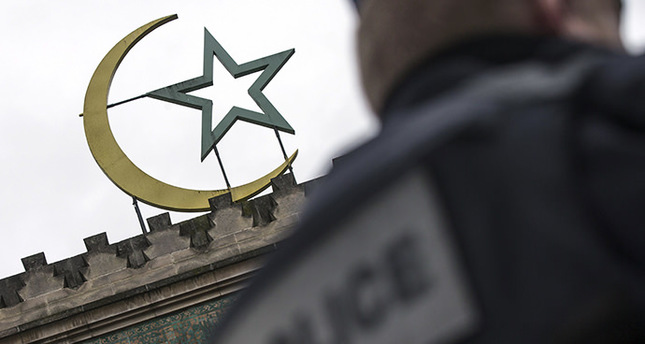 by Daily Sabah Jan 20, 2015 12:00 am
In the aftermath of a deadly attack on a French satirical magazine, Muslims in France have been subject to violent attacks due to an increase in suspicion and negative feelings toward the French Muslim community. Reports of attacks on mosques and Muslim-run businesses in various places in France have led many French Muslims to fear rising Islamophobia. However, there are no reports that those engaged in violent attacks are to be charged with penalties, with many incidents going unreported.

The French media reported revenge attacks on Muslims in the aftermath of the Paris massacre, and many Muslims have become the target of renewed attacks on religious places belonging to the Muslim community. Twenty-six mosques around France have been subject to attack with firebombs and gunfire as of 14 January, with a total of 60 reported Islamophobic incidents.

France is home to the largest Muslim population in Europe, estimated at over eight million. However, French Muslims do not feel safe due to low security measures imposed by the French government compared to other French minorities under threat.

Anti-Muslim demonstrations in Germany are indicative of the resurgence of far-right extremism that has sparked hatred towards the Muslim community.

The planned weekly marches by the right-wing movement PEGIDA in Dresden were cancelled by German police due to the possible terrorist threat. However, German authorities have ordered the cancellation of these weekly anti-Islamic marches, as it promotes prejudice and hatred towards the Muslim community. Prominent German political leaders' call to cease anti-Islam protests were not able to stop the PEGIDA movement.

"Whatever you think of PEGIDA, so long as the protest does not break our laws, it is protected by the right to freedom of expression," said German Justice Minister Heiko Maas. "Our democracy can cope with PEGIDA. The vast majority in Germany rejects them and took to the streets in recent weeks to protest against them. This must continue to be possible."

Germany is home to four million Muslims in a total population of nearly 81 million. It has the largest Muslim population in Western Europe after France. Since October 2014, Germany has witnessed several anti-Islamic demonstrations and racially-motivated attacks organized by far-right extremist groups.

Since then, there have been weekly anti-Islamic rallies organized by far-right populist groups in various German cities. The weekly marches started with nearly 500 demonstrators protesting the rising number of immigrants. However, the marches have grown much larger, with support growing from disenchanted Germans who oppose the "Islamization" of their country.