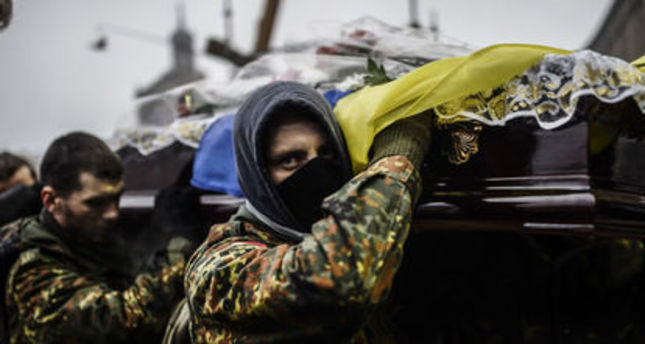 Fighting continues between Kiev government forces and pro-Russian separatist groups in the city of Donetsk, as the bitter battle for control over Donetsk's now-shattered airport has turned the city into a war zone, with at least three civilians reportedly killed during heavy shelling on Tuesday.

More intense fighting is expected as Ukraine prepares to scale up military activity in the rebel-held areas. In addition to anti-terrorist operations in the east of the country, Ukrainian President Petro Poroshenko drafted a new military bill that conscripts Ukrainian civilians and dispatches them to the zone where the operation is under way. "Women in the age group of 25 to 50 years old might also be drafted if need be," the bill on conscription stated, as reported by the Russian state-run news agency Itar-Tass.

s fighting has intensified, Ukrainian authorities have claimed that the Moscow government sent troops into eastern Ukraine to back rebels in the battle with Kiev forces. However, Russia denied Kiev's accusations on Tuesday, saying that "[Tuesday's] statement from Kiev about the alleged transfer of units of the Russian Armed Forces through the Russian-Ukrainian border is not worth any criticism. This is absolute nonsense."

The renewed armed hostility demonstrates that no peaceful and permanent resolution has been agreed on and all mediating attempts have failed. Truce talks were not able to produce a breakthrough over issues relating to the settlement of the crisis in Ukraine.

The months-long conflict in eastern Ukraine has come at the cost of an increasingly high death toll, with a large increase in the numbers of internally displaced people. Almost 5,000 people were reportedly killed during heavy clashes in rebel-held areas, according to U.N. figures. "More than 630,000 Ukrainians have been displaced internally, and some 590,000 people have fled to neighboring countries.

In addition, more than five million people are living within the conflict zone," the Norwegian Refugee Council reported, revealing the worst humanitarian crisis in Europe. The major humanitarian crisis hit the country in February 2014. Following pro-Russian rebels self-proclaiming the existence of the Donetsk People's Republic in April, instability has prevailed in eastern Ukraine. After declaring independence, clashes have increased throughout the region where government forces have stepped up operations.