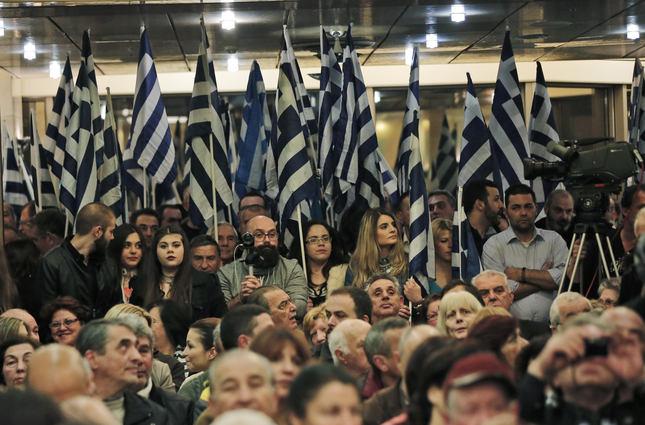 by Anadolu Agency Jan 22, 2015 12:00 am
Anti-Islam sentiment was rampant at the first electoral rally organized Wednesday night by a Greek far right party.

Hundreds of people gathered in a central Athens hotel for a rally organized by Golden Dawn, in which the party leader Nikolaos Michaloliakos addressed the crowd from Korydallos prison via Skype.

"We vote Golden Dawn so that there will be no mosques, not in Athens, not anywhere," said parliamentary candidate Ilias Panagiotaros, before Michaloliakos spoke from his "cell of honor," as he called it.

Michaloliakos and six other MPs of the far right party - which many describe as neo-Nazi - have been held in custody after the murder of Greek rapper Pavlos Fyssas in September 2013.


"I address you from inside the prison where I am unjustly kept with the other fellow fighters," he said. "We are in prison after an unprecedented political scheme that was set up in the basements of political parties rather than in the fields of justice."

"We are here for a crime that a Golden Dawn follower committed, does this mean a whole political party is responsible for this crime?" he added.

"We condemned this crime, but that was not enough and they declared our party a criminal organization, with the political purpose: the elimination of Golden Dawn."

"This political scheme will be written with black letters in the pages of political history and everyone will understand how unfair this political system is," he said.

Golden Dawn's breakthrough came in 2012 when it obtained 6.92 percent of the overall votes in the national election making it the country's fifth political group and enabling them to enter parliament for the first time.

Panagiotaros, a parliamentary candidate, harangued the crowd: "They tell us about the debt; what is this debt? How much is it? Who created it? What are these loans? In whose pockets have they gone?"

Amid considerable cheering, Panagiotaros continued: "We vote for Golden Dawn so that our neighborhoods can become Greek again, and our children will be able to walk freely without fear."

"We vote for Golden Dawn so that we don't have to face any jihadists and Islamist intruders that do as they like. They steal, kill and rape and have built hundreds of mosques in our neighborhoods and no one does anything about it," he said.

Golden Dawn stands to become Greece's fourth political party in the upcoming elections this Sunday, according to recent opinion polls.