Russia is 'tricking' the world: Poroshenko 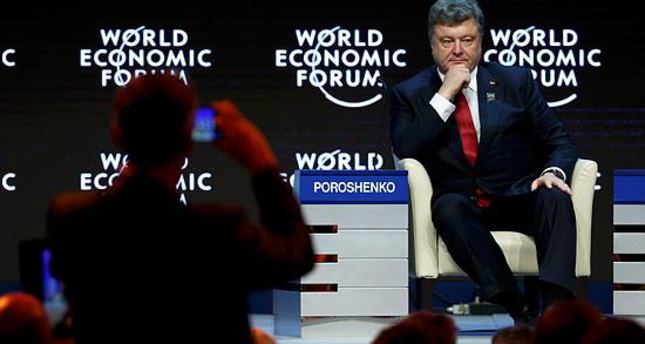 by Anadolu Agency Jan 22, 2015 12:00 am
Ukraine's president on Wednesday accused Russia of 'tricking' the world, about its willingness to withdraw its troops and weapons from Ukraine.

'Without the withdrawal of foreign troops and heavy artillery, a cease-fire would be fragile and can be broken the very next day,' Petro Poroshenko told The Anadolu Agency at the World Economic Forum in Davos, Switzerland.

"Everything else is just a trick," he added.

His comments came after Russia said that it was seeking a cease-fire to reach a "peaceful settlement" to the crisis there.

Poroshenko cut short his visit to the World Economic Forum in Davos which began on January 21 due to escalating tension in eastern Ukraine.

The Ukrainian government and pro-Russian separatists signed a ceasefire agreement in the Belarusian capital, Minsk, on September 5.

However, neither side has respected it, and the fresh wave of violence in the separatist stronghold of Donetsk has increased uncertainty over the future of the hard-won cease-fire.

In his speech to the World Economic Forum on Wednesday, Poroshenko also said that Russia had more than 9,000 troops and over 500 tanks in eastern Ukraine to back separatists who were occupying seven percent of Donetsk.

The International Monetary Fund has promised additional aid to Ukraine as its economy struggles to support the conflict.

Poroshenko urged Russia to comply with the cease-fire saying that: "We are ready an immediate ceasefire but it should be reliable."

"We demand the strict following of the Minsk agreement. Withdraw all foreign troops and heavy artillery from the Ukrainian border, release the hostages, close the border and launch the political process. This this is exact obligation we have under the Minsk agreement with Russia's signature," Poroshenko said in his speech on Wednesday.

At least 1,363 fatalities have been recorded since the September 2014 ceasefire. More than 4,800 people have been killed since April, when pro-Russian rebels seized parts of Luhansk and Donetsk.