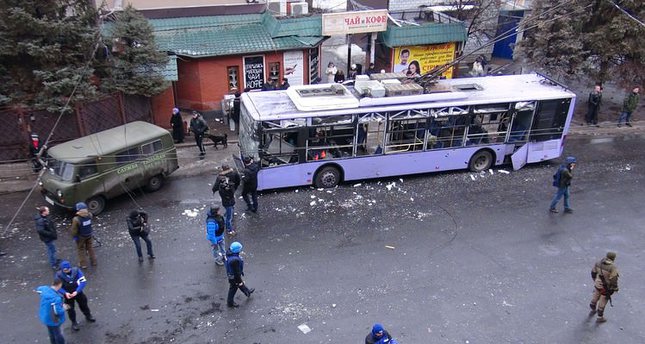 by Jan 23, 2015 12:00 am
The shelling of a bus and clashes in Ukraine's separatist east left 34 people dead Thursday as Kiev was forced to abandon its defense of Donetsk's airport in one of the deadliest days of the nine-month war. In the worst incident, 13 civilians died when shelling hit a trolleybus Thursday morning in the rebel bastion of Donetsk, with Kiev alleging that ultimate blame for the tragedy rested with Russia. The violence came only hours after peace talks in Berlin called for a ceasefire and as the toll from the conflict surpassed 5,000 dead, with a million people also forced from their homes. Another 10,000 people have been wounded by rocket and mortar strikes raining down daily on the industrial region's residential districts, Michael Bociurkiw of the Organisation for Security and Co-operation in Europe told Ukrainian radio. With intensifying clashes rocking Donetsk airport in recent days, Ukraine's military said early Thursday that its troops had abandoned the main part of the site.

The airport had become the symbolic prize of the conflict, with the army and pro-Russian rebels continuously battling for control of the devastated site. "Yesterday evening we made the decision to leave the new terminal," military spokesman Vladyslav Seleznyov said in reference to the main airport building that had been held by Kiev forces since late May. The trolleybus shelling was among the bloodiest incidents involving civilians in recent months in a conflict that has devastated the ex-Soviet republic's industrial heartland and brought Ukraine's economy to its knees. Stunned Donetsk residents gathered around the shredded remains of the bus, with bloodied bodies of elderly victims sprawled in their seats hours after the attack and local militias cautiously inspecting the damage. An official with the city's emergency services said 12 people died in the bus while another was killed in a passing car. One resident who lives nearby said shelling in the area the day before targeted a military academy housing a headquarters for rebel fighters, killing two militia members. "Today as the shelling began, some people managed to escape from the trolleybus stop," said Maksim, a 35-year-old teacher. "There are several ambulances and (rebel) military police here. Children are very scared."

Russia's government-controlled television immediately blamed the attack on Kiev's forces, while Ukraine said the rebels were responsible and added that ultimate responsibility rested with Moscow. "Russian terrorists again committed a horrible act against humanity," Ukraine Prime Minister Arseniy Yatsenyuk said in statement. "And responsibility for this is borne by the Russian Federation." The strike occurred just south of Donetsk's city center, with concerns having been raised over shelling that has at times moved closer in from the airport northwest of the city, putting civilians in increasing danger. Thursday's violence came hours after the foreign ministers of Russia, Ukraine, Germany and France ended a crisis meeting in Berlin with a joint call to cease hostilities, but no breakthrough agreement to stop the bloodshed. The talks had been held against the unpromising backdrop of fresh clashes and after Ukraine's president accused Moscow of fuelling the war with fresh troops and tanks. The four top diplomats in their statement could agree to "call on all sides involved to cease hostilities and to withdraw heavy weapons" back from a demarcation line agreed in the widely flouted September truce signed in Minsk.

German Foreign Minister Frank-Walter Steinmeier said the main achievement was that all sides had agreed that the demarcation line agreed in the Minsk pact would form the basis for the pull-back of heavy arms on both sides. The talks had "tested the patience of all participants", he said after meeting his Russian counterpart Sergei Lavrov, who left the talks first, as well as Ukraine's Pavlo Klimkin and Laurent Fabius of France. U.S. Secretary of State John Kerry accused the rebels of attempting "a blatant land grab", while Washington's U.N. envoy Samantha Power said Russia was pursuing an "occupation plan" in the east. Ukrainian President Petro Poroshenko, speaking on Wednesday at the World Economic Forum in Davos, said the upsurge in fighting after a nearly month-long lull was prompted by a new surge of Russian forces and weapons. "We have more than 9,000 troops of the Russian Federation on my territory, including more than 500 tanks and heavy artillery and armed personnel carriers," he said. Moscow strongly denies supporting the insurgents despite NATO satellite imagery purporting to show its forces' presence in Ukraine.