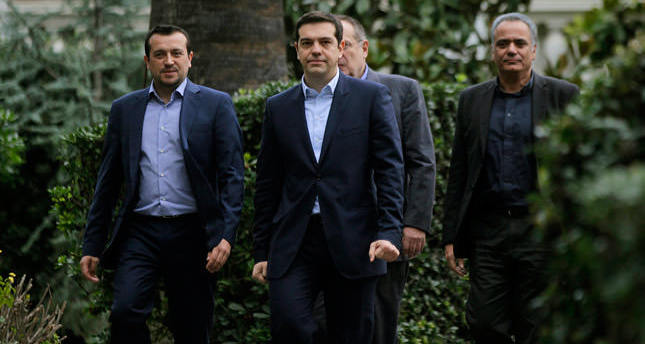 Radıcal left Syriza won Sunday's Greek parliamentary elections in a landslide victory, with its leader Alex Tsipras sworn in yesterday as the prime minister. The coalition government of Syriza and the right-wing Independent Greeks (ANEL) are said to have little else but anti-austerity to unite them. Experts fear the new government may be short-lived.

Following the historic victory of the radical left-wing party Syriza in Sunday's election, Greece awoke to a new era with a new coalition government formed by two different movements: Syriza and the right-wing Independent Greeks (ANEL). However, the new anti-bailout government is stirring suspicions as to whether the coalition government would be short-lived. The two opposite movements have nothing else in common expect their opposition to the European Union-International Monetary Fund bailout.

"Syriza is made up of groups espousing different ideologies and [Syriza leader Alexis] Tsipras will have to seek a compromise inside his party, which is difficult," Manos Papazoglou, a professor of political science at Peloponnese University, told AFP news agency.

"This is a strange and unnatural alliance," he said. "The truth about the government's cohesion will be revealed when they sit at the negotiating table in Europe."

The leftist party Syriza won 149 seats in the Greek parliament with 36 percent of the vote. Syriza fell two seats short of achieving a majority in the 300-seat parliament in Sunday's elections. The Independent Greeks gained only 4 percent of the vote and 13 seats. "From this moment, I want to announce that we have a government," said Independent Greeks chairman Panos Kammenos after talks with Tsipras on Monday, as reported by DPA, and was followed by Tsipras being sworn in as the country's new prime minister on Monday.

Greece has long been suffering from sweeping spending cuts and a painful six-year recession. Austerity measures being pursued by eurozone countries including Greece have led to a political battle within countries over whether the belt-tightening policies have gone too far at the expense of economic growth. The clashes over economic policies have created political turmoil just as in France, Austria and Italy. German Chancellor Angela Merkel, the driving force in the EU's austerity drive, said that Greece should stay in the eurozone "despite the difficulties."

Regarding Tsipras' victory, Italy's EU affairs minister Sandro Gozi said that the new government would create "new opportunities to pursue change in Europe to create growth and investment and fight against unemployment."