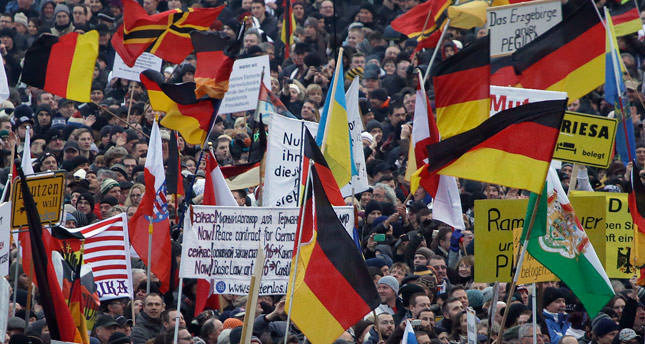 by Daily Sabah Jan 26, 2015 12:00 am
As anti-Islam rallies organized by Patriotic Europeans against the Islamization of the West continue unabated in Dresden, Germany's tolerant and pluralist reputation in the world has been severely damaged, a German top diplomat warned on Sunday.

"At home we under-estimate the damage that PEGIDA's xenophobic and racist slogans and placards have already had," German Foreign Minister Frank-Walter Steinmeier said in an interview with daily newspaper Bild, published shortly before the start of PEGIDA's 13th rally in Dresden on Sunday. "Whether we want it or not, the world is watching Germany with great attention," Steinmeier continued, adding that "PEGIDA does not speak in Germany's name."

People called for "cosmopolitanism and tolerance", while carrying posters saying "Refugees welcome" and "Dresden is colorful." To prevent the alarming rise of far-right extremism among Germans, a considerably high number of protestors along with prominent German leaders participated in counter-demonstrations.

This was the first rally after the resignation of the movement's leader, Lutz Bachmann, after his postings as Nazi dictator Adolf Hitler on social media. The movement condemned the racist posting stating that it does not oppose Islam or refugees. Instead, the movement claims that only extremist groups supported by immigrants would not be allowed to enter Germany. However, the right wing populist movement attracts support from hundreds of right-wing extremists as well as established groups of football hooligans bent on violence promoted by neo-Nazi sentiments.

During the rallies, slogans such as "Zero tolerance towards criminal asylum seekers," "Protect our homeland" and "Stop the Islamization" demonstrate that the movement's supporters have somewhat diverged from its manifesto, as people are more inclined to act violently against Muslims and immigrants, which reveals existing neo-Nazi violence in the movement, a charge that the PEGIDA strictly denies.

The Dresden-based far-right PEGIDA group has gained attention recently while drawing support from other far-right groups and ordinary citizens as far-right anti-Muslim groups have become more prominent in Germany. Since October 2014, there have been weekly anti-Islamic rallies organized by far-right populist groups in Dresden. The city became a destination for Islamophobes of all stripes, with more people considering Islam a threat, signaling a rising fear and hatred toward Muslim society and immigrants.

The weekly marches started with nearly 500 demonstrators protesting the rising number of immigrants. However, the marches have grown much larger, with support growing from disenchanted Germans who oppose the "Islamization" of their country. PEGIDA has struck a chord with many Germans after gaining a solid social grounding in German society, where the rise of far-right extremism has dominated the political discourse.

Muslim Turkish immigrants are still considered "Ausländers" (foreigners), and not German. Many German Muslims feel threatened by the ongoing Dresden rallies, which unveil Germans' growing fear of Muslims that is validated by the neo-Nazi elements of the rallies. They have long been subjected to ill treatment, discrimination and violence by some neo-Nazis linked to far-right groups. Germany is home to three million Muslims in a total population of nearly 81 million, and Muslims constitute the largest immigrant community in Germany.